The Memorial Church renovations are finished

More than 50 people worked on the three-month project, repairing, repainting, improving, and updating every nook of the venerable building.

The Rev. Professor Peter J. Gomes took an active, aesthetic role in the proceedings. With the consultation of Elizabeth Randall, Gomes decided on the color and design. “We are all very pleased with the entire process and effect,” Gomes said. “The colors are stunning, and the fact that the work was done in a timely and cost-effective way is outstanding.”

Preparing for the immense job turned out to be more time-consuming than the renovation itself. Scaffolding two stories high was erected to get plasterers and painters up to the domed ceiling. Moving crews carried out the church pews, which were washed, refinished, and stored.

Left, well-protected painter Mike Fall aims and fires a clear coat of finish onto the choir benches in the church. Center, gold leaf is applied. Right, telltale stencil-like marks show where the pews were.

Then, workers shrouded the pulpit, organ, lectern, and the carved oak screen in plastic, and the painting crews scoured and painted the church from ceiling to floor. Glistening gold leafing was reapplied to the ceiling emblem, the stone relief figures of Columbia and Alma Mater, and the four torches of eternal flame.

And all these treasures will be easier to see now. Interior lighting was almost doubled – from 580 to 1,100 lumens. Finding matches for the existing fixtures could have been a daunting task, but fortune smiled on the project. Richard Campbell of Harvard Planning and Real Estate, explains “We originally thought we would have to have the lamps re-created, but on a hunch we looked into one of the existing light fixtures and found an old tag from the California company that originally supplied the church in 1932. Taking a chance, we called the 70-year-old phone number and were surprised to find they not only still existed but also still had the plans for the very lamps we needed. Once we explained the renovation, the company agreed to remake the discontinued lamps.”

The renovations will delight not only the eye, it turns out: The Isham organ, built by Charles Fisk in 1967, was completely disassembled, cleaned, and tuned, and is now ready to accompany the heightened visual experience with sweet soul music. 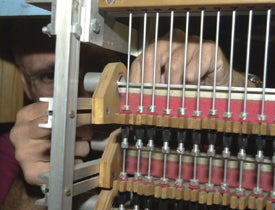 Left, after being disassembled and cleaned, the Memorial Church organ is tuned by Rick Isaacs. Right, a long view of the church, pewless in preparation for renovation.