A long view of the Big Dig

When you walk into the new Big Dig exhibition at Gund Hall from the Quincy Street entrance, the first thing that hits your eye is a pair of mural-sized photographs of Boston from the air.

Both are taken from approximately the same angle and altitude – approaching the Hub from the inner harbor, looking northwest. The color photo on the left shows the city more or less as it exists today. The sepia-toned print on the right, with higher resolution than its modern counterpart, shows the Boston of 1940.

It is amazing to see how much change has taken place in 60 years. The Boston of 1940 hugged the ground, an expanse of low-lying brick buildings punctuated by a few modest skyscrapers. In today’s Boston, only Beacon Hill, the Common, and the North End appear unchanged. In between, a swath of high-rise towers has sprung up like enormous glass and steel mushrooms. Snaking through their midst, like a river irrigating this hardscape luxuriance, is the Central Artery.

The exhibition, “Constructing and Reconstructing the Central Artery: Boston 1950-2000,” tells the story of how this thoroughfare came to be and how the largest urban infrastructure project ever undertaken will soon render it invisible.

There is an irony to the story that becomes clear as we follow the exhibition’s chronology. First, a succession of maps and articles traces the Central Artery’s genesis as automobiles multiply and demands for a more efficient road system grow increasingly insistent.

“Mud and Muddle or Mobility?” asked a 1953 pamphlet encouraging the city to get the Central Artery Project under way. “Boston to Get Skyroad Soon!” trumpeted a Boston Globe headline as the process went forward.

How surprised these civic boosters would be if they knew that only 30 years later Bostonians would be so dissatisfied with their “skyroad” that they would be willing to spend billions of dollars and endure years of inconvenience to sink it out of sight.

“It’s interesting that you hear the same urgency in the rhetoric in the 1950s and the 1980s – one to put it up and the other to take it down,” said Patty Heyda, one of the exhibition’s curators. 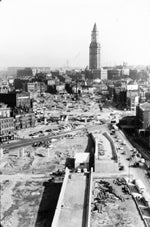 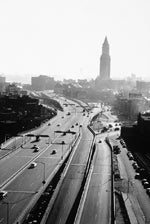 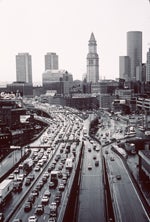 A series of shots (bottom) shows the view from Causeway Street looking South toward the Custom House Tower. The first photo (pre-Artery) is from the early ’50s; the second, later in that decade, after completion of the project; the third, today.

The huge cost of the project – $14 billion is the latest estimate – represents not just the expense of placing the Central Artery underground, allowing severed neighborhoods to rejoin and a chain of squares and parks to revitalize the urban fabric. There is much more to this mammoth project – the third harbor tunnel, the Leonard Zakim Bunker Hill Bridge, public transportation improvements, upgraded utilities, parks, housing, and public art – to name but a few.

According to Alex Krieger, chairman of the Graduate School of Design’s Department of Urban Planning and Design, and one of the exhibition’s curators, fully one-third of the project’s costs have gone toward keeping the city functioning while the construction proceeded. Another third has been spent on mitigations and amenities, and only a third on actual construction.

“Boston has been able to throw in a lot of other stuff that needed to be done but that isn’t part of the narrowly defined project,” Krieger said. “There are two views of this strategy – either it’s very clever, or it’s driving us into bankruptcy.”

Peter Vanderwarker, an architectural photographer who has been documenting the Big Dig since construction began, and who served as the exhibition’s third curator, is not upset by the project’s huge price tag.

“Federal money spent on cities is well-invested,” he said. “It helps get people to their jobs, it helps get them to shopping, and it makes the city more pleasant.”

Vanderwarker’s large-format color photos displayed along one wall convey the size and boldness of the project. Carrying his 14-pound view camera in a special cradle over one shoulder, Vanderwarker has spent the past 15 years climbing ladders and negotiating scaffolding in search of the perfect perspective. Dust, dirt, vibration, and the occasional swinging girder complicated his task, but you would never know it from the results, which excel in clarity and drama.

Vanderwarker has created an archive of more than 30,000 photos of the Big Dig, some of which appear in his book, “The Big Dig: Reshaping an American City” (Little Brown & Co., 2001).

“This is the biggest change in the city since Back Bay was created. I’ve been excited about it since it began, and I thought it was important to document it in a rigorous way,” he said.

The exhibition will be on display until Oct. 28 at Gund Hall, Graduate School of Design.