By Story by Alvin PowellPhotos by Jon Chase

Carl Hagen regretted that he had but one life to give for his – butterfly. George Washington regretted that his pheasants didn’t last longer, and Mugger, well, Mugger was an enormous saltwater crocodile and if he regretted anything at all, it was probably eating the horse that brought about his doom.

They’re all here, big and small, furry and bony, shiny and not so shiny.

The Harvard Museum of Natural History is not only full of science and specimens, it’s full of stories – some scientific, some not.

But often more interesting than the specimen itself is the story behind it. Some of these tales are told as part of the display, while some require a bit more digging. Here is a sampling of what you’ll find there. 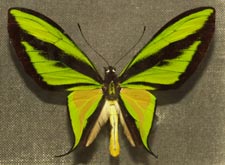 One scientific story the museum is telling is that of the butterfly, through its current exhibit “Beauty on the Wing: The Double Lives of Butterflies,” which runs through Labor Day. Tucked away in a corner next to a live exhibit of ants tending (swarming all over, to the untrained eye) caterpillars is a large, black and green sample of the rare Paradise Birdwing butterfly.

The butterfly itself, while a beautiful specimen, isn’t necessarily the most interesting aspect of its presence in the gallery. It seems that the collector, Carl Hagen, in the course of his search for specimens, became the collected.

“I sent you the one and only Orni[thopetera] paridisea it was ever my good fortune to receive,” reads an accompanying letter from an anonymous butterfly broker who handled the specimen after it was collected around 1900 in Papua New Guinea. “Carl Hagen, who took this pair was afterward eaten by the Papuans ….”

On the other side of the Lycaenidae is a curious cabinet, chock full of genitalia. They’re actually caterpillar genitalia, useful in categorizing species, which were extracted and preserved by the also-novelist Vladimir Nabokov, while he worked from 1942 to 1948 as curator of butterflies at the MCZ.

The butterfly exhibit will be replaced by an exhibit highlighting a wide range of intriguing objects and specimens, many with important research implications, from the museum’s vast collection. Called “Dodos, Trilobites and Meteorites … Treasures of Nature and Science at Harvard,” the exhibit opens Sept. 29. 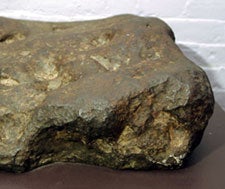 It’s just a lump of iron, but it is 4 billion years old and from outer space. And you can touch it in the Mineralogical and Geological Museum. The meteorite, called Gibeon after the part of Namibia where it was found, is one of three in the museum’s geological galleries. Scientists estimate that Gibeon crystallized 4 billion years ago and broke up violently in the atmosphere, creating the largest meteor shower known. More than 100 large pieces of the meteor with a total mass of more than 20 tons have been found in the 275-kilometer-by-100-kilometer area where the debris landed.

Keeping Gibeon company are two other meteorites, Carbo and Coahuila, named after the parts of Mexico where they were found, Carbo by Mexican cowboys in 1923 and Coahuila – which is actually in three pieces – in 1868 by H.B. Butcher. 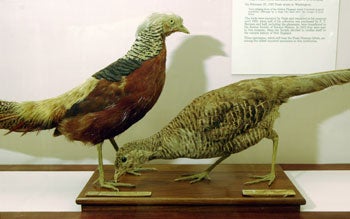 In November 1786, George Washington received a shipment of animals from the Marquis de Lafayette that included, in addition to some asses and a partridge, seven pheasants. Two of them, golden pheasants from King Louis XVI’s aviary, have been preserved and are in the MCZ.

The birds have come a long way over the centuries. They lived just a short time in Washington’s care, the first bird making it until February 1787 and the other dying in March of that year.

Luckily for posterity, Charles Wilson Peale of Philadelphia, a naturalist and collector, caught wind of the birds’ arrival and asked Washington to send him the bodies if they died so he could preserve them.

“I cannot say that I shall be happy to have it in my power to comply with your request by sending you the bodies of my Pheasants, but expect that it will not be long before they will compose a part of your Museum, as they all appear to be drooping,” Washington wrote Peale in January 1787.

Their correspondence includes Peale’s request – after receiving the first bird in those days with no refrigeration – that for subsequent shipments Washington order “the Bowels to be taken out and some Pepper to be put in to the Body, but no Salt which would spoil the Feathers.” He then added “And if you please to have some directions put on the box which would prevent delay on the Passage of them.”

Peale’s museum became the most famous in America, but it failed in 1846 and its holdings were divided between P.T. Barnum’s American Museum in New York and Boston Museum. The birds went to the Boston Museum and, in 1914, to Harvard.

If it’s history you want (and a bit of tragedy, as well), there are many fascinating extinct creatures at the museum. Along with the dinosaurs and mastodons, however, are the recently departed – species extinct or on the edge of extinction at the hand of man.

One case highlights birds that have disappeared, including the great auk, the passenger pigeon, the heath hen, and the Carolina parakeet.

Their stories are cautionary testaments to man’s often unthinking dominance over the planet. The Great Auk, the bird originally known as a “penguin,” lived by the millions along the North Atlantic coast. They resemble today’s Southern Hemisphere penguins but are unrelated. The flightless birds were slaughtered for their meat, eggs, and feathers until 1844, when collectors on Eldley Island in Iceland killed the last pair.

Once in similar abundance was the passenger pigeon, which used to fly in flocks so large they would literally take days to pass. Unfortunately for the birds, they were good to eat and were hunted into extinction. The last specimen died in 1914 in the Cincinnati Zoo.

Similarly extinguished is the thylacine, or “Tasmanian tiger.” The thylacine, a marsupial doglike predator with rows of vertical stripes on its back, was hunted into extinction by ranchers concerned about their sheep. The last thylacine was killed in the wild in 1930. The last known living thylacine died in a zoo in 1936.

In another room is the big boy, Harvard’s Kronosaurus, dug up in Australia in 1932. The 42-foot marine reptile, a kind of plesiosaur, occupies an entire wall of the MCZ’s fossil room, and was the first mounted specimen of its type.

William E. Scheville, a graduate student on a Harvard collecting expedition to Australia in 1931, discovered the specimen. Scheville found the fossilized bones in a limestone deposit on a sheep ranch. The limestone holding the Kronosaurus was dynamited out of the ground and shipped to Harvard, where it took 26 years to be removed from the rock, cleaned, assembled and put on display.

For years after it was collected, not enough money could be found to work on the specimen. That changed when the Kronosaurus came to the attention of Godfrey Lowell Cabot of Boston, Class of 1882, who was in his 90s and had been fascinated by sea serpents since his childhood. His great-grandfather, after going to investigate popular reports of a 60-foot sea creature, had observed what he described as a sea serpent – at longer than 40 feet – swimming in Gloucester Harbor in 1817.

Today the specimen – the Kronosaurus, not the sea serpent – complete with its 9-foot head and enormous jaws, dominates the room, swimming against a blue background. 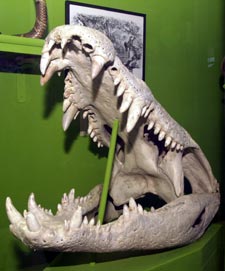 In the Philippines in 1831, a giant saltwater crocodile, considered to be one of the most dangerous reptile species, ate one shepherd (and one horse) too many. The animal, known appropriately as Mugger, measured somewhere between 27 and 30 feet, was 11 feet around, measured just behind its front legs, and had a head that was 5-feet-6-inches from the nose to the first vertebra.

It was a formidable opponent. A French plantation owner had seen it attack a horse and rider crossing the river where it lived. They escaped when the croc’s jaws closed on the saddle and tore it off the horse’s back. The rider, a shepherd, drew his cutlass and waited in shallow water for the animal, despite advice to the contrary. After absorbing the man’s blows with the sword, Mugger grabbed him by the leg and dragged him to his death.

Two months later, the crocodile struck again, eating a horse, which was the final straw. The plantation owner, a visiting American and several local people decided enough was enough. Using lances, nets, ropes, and guns they attacked. But the crocodile held them off for six hours before it was finally killed. It reportedly took 40 men to haul it ashore.

The plantation owner presented the American visitor, George Russell, with Mugger’s skull. Russell gave it to the Boston Museum of Natural History, which gave it to Harvard.