Tlingit artifact is returned to Alaska

A century after it was given to Harvard by railroad tycoon Edward Harriman, the Tlingit totem pole that formerly stood guard in the Peabody Museum’s Hall of the North American Indian is returning to its original home on the coast of Alaska.

The pole has long delighted visitors to the museum with its depiction of a bear peering from its den. The paw prints along the trunk seem to indicate the path the bear has followed to its elevated abode, while above its head a giant raven perches with outspread wings. The bear is the totem of the Teikweidi clan, which traces its origins to the marriage between a female bear and a human hunter.

In 1899 the pole, along with five others, was loaded onto Harriman’s steamer from the seemingly abandoned village of Gash at Cape Fox. Harriman had financed the exploratory expedition, which included 25 distinguished naturalists and scientists, including John Muir, John Burroughs, George Bird Grinnell, and photographer Edward S. Curtis.

Many of the artifacts that Harriman collected were later distributed to institutions and museums throughout the United States. The Teikweidi totem pole went to the Peabody Museum in 1900 at the suggestion of Charles Palache of Harvard’s Mineralogical Laboratory. The pole has remained at the museum ever since, with the exception of a 1970 journey to the World Exposition in Osaka, Japan, where it was displayed in an exhibition of American folk art.

What Harriman and his colleagues didn’t know when they came upon a Native American village empty of inhabitants but full of extraordinary carvings and ceremonial objects is that the Tlingit Indians who lived there had fled seven or eight years before to escape a smallpox epidemic. Since Gash was part of their traditional territory, the Tlingit had never regarded it as abandoned.

The survivors of the epidemic founded a new settlement called Saxman, where their descendents live today. Some years later, when a contingent from that village made a return visit to Gash, they were appalled to discover that many of their most treasured carvings had disappeared. 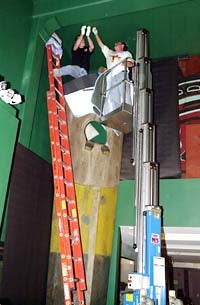 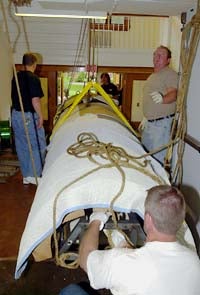 Left: Vallance and Stephen Collins install pulleys in the ceiling of the Peabody Museum in preparation for lowering the pole onto its custom-made platform.
Right:After more than 100 years, the pole leaves the Peabody Museum (above) for a journey by truck and barge to the village of Saxman, Alaska, where it will be welcomed back with full ceremony.

Flash forward to 1990. President George Bush signs into law the Native American Graves Protection and Repatriation Act (NAGPRA), which mandates that museums receiving federal funds return cultural property to the native groups to which they belong.

By checking summaries of holdings submitted by many museums including the Peabody, Saxman officials were able to locate many of the Gash carvings. In November 1999, the Peabody received a letter claiming the Teikweidi pole.

On June 28, the pole was lowered onto a custom-made platform and loaded into a waiting truck. The bear and the raven were removed and crated separately. The pole was driven to Seattle, along with a second pole being repatriated from the Museum of the American Indian in Washington, D.C. In Seattle the two poles will be transferred to a barge for transport to Ketchikan, the port for the village of Saxman. On July 23, they will be welcomed back with full ceremony, including a potlatch. Anne-Marie Victor-Howe, curatorial associate at the Peabody, will travel to Alaska to represent the museum at the ceremony, which has been designated “One Hundred Years of Healing.”

But the spot that the pole occupied in the Hall of the North American Indian will not be empty for long. The Peabody has commissioned Nathan Jackson, master carver of the Tlingit tribe, to create a new totem pole for the museum. Jackson is carving the pole from a red cedar tree donated by the Cape Fox Corp. at Saxman. The new pole will be installed in the Peabody Nov. 19.

“We are very grateful for this wonderful gift from the village corporation of Saxman,” said Peabody Museum director Rubie Watson. “It is a fine gesture and one that symbolizes a new bond between the descendants of Gash village and the museum.”