Third World countries are drowning in debt, and it’s up to the wealthy countries to save them, said rock superstar Bono, highlighting an afternoon of reflection, thank-yous, and goodbyes for members of the Harvard College Class of 2001 during Class Day ceremonies in Tercentenary Theatre.

Bono, lead singer for the Irish rock group U2, quoted some shocking statistics to prove his point that the world’s wealthier countries must step in to prevent disaster.

“For every one dollar in government aid we send, nine dollars comes back to us in the form of debt service,” he said.

Third World countries, which cannot declare bankruptcy as individuals can, are often saddled with debt through no real fault of their own, he said. President Mobutu of Zaire, for example, transferred huge portions of his country’s wealth into his own Swiss bank accounts, resulting in deficits that his people are still struggling with.

Bono was the highlight of a two-hour program that featured a send-off by Harvard College Dean Harry R. Lewis, as well as the Ivy Oration, given by B.J. Novak, and the Harvard Orations, given by Amy Chen and Mark Little.

The day before Commencement has traditionally been known as Class Day, when graduating seniors say goodbye to each other and to Harvard in their own way. Thousands of graduates, parents, and family members filled Tercentenary Theatre’s rows, almost like a casual dress rehearsal for today’s Commencement.

Bono, wearing his trademark sunglasses and a backward camouflage cap, strode to the stage raising his fist in a victory salute. He spent the first part of his talk explaining how he, a rock musician, came to be involved in the cause of debt relief.

“Who am I and what on earth am I doing here? My name is Bono, and I am a rock star. I say that not as a boast, but more as a confession.”

A rock star, and especially a rock singer, is “someone with a hole in his heart almost as large as his ego,” he said.

Nevertheless, rock music has been a path for the singer toward social responsibility. As a teenager, he found rock to be the music of rebellion. But as an adult and the father of four children, he asks himself what he is rebelling against now.

“I am rebelling against my own indifference, against the idea that the world is the way the world is and there’s not a damn thing I can do about it.”

Bono spoke about others who have joined him in his efforts to secure Third World debt relief – including Muhammad Ali, Bob Geldof, Pope John Paul II, and especially Harvard economist and Center for International Development director Jeffrey Sachs.

“Sachs not only let me into his office, but into his Rolodex, into his head, and into his life for the last few years.”

He also praised the efforts of Harvard’s President-elect, Lawrence Summers, then U.S. Treasury Secretary. Summers was instrumental in getting Congress to vote $435 million for Third World debt relief, which leveraged billions more from other wealthy countries, Bono said.

On the grass roots level, these efforts have spurred improvements that include twice as many children attending school in Uganda and a $14 million increase in health spending in Mozambique.

“I’m not here to brag or take credit. I’ve come here to ask your help,” he said, calling the current AIDS crisis in Africa, “The biggest health crisis since the bubonic plague wiped out a third of Europe.”

Bono spoke of watching the moon landing on television as a child and thinking that America could do anything.

“Is it still true?” he asked. “If it’s not, then you of all people can make it true again.” 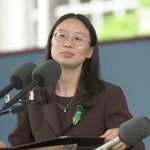 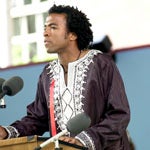 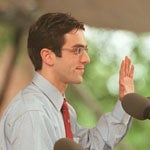 The three student orators helped the class bid itself farewell. Chen, Little, and Novak treated their classmates to a mix of humor, philosophy, and advice during their speeches.

Chen looked to the future and the past, reminding classmates that Harvard will always be with them – despite the “We’re Outta Here” signs in their windows. When she arrived at Harvard, Chen said she was uncomfortable with the idea that being affiliated with Harvard could bring rewards beyond those she might have otherwise earned through her own hard work.

She said she has since come to terms with the magic of the Harvard name – its power to open doors, to make others listen, to convince others to give a graduate the benefit of the doubt.

“I’ve recognized that the power of Harvard is a neutral one. It is how we use and what we do with it that infuses it with meaning,” Chen said. “Furthermore, the mark of Harvard is and will be with us wherever we go, and to deny its existence is not some noble act, but simply poor stewardship. So I pass on to you a simple piece of advice: Class of 2001, use your privilege. Use your privilege.”

Little followed Chen and gave some philosophical direction to the day. He recalled conversations with friends in which they talk about what they’d love to do – make a movie, dance – but who didn’t think those dreams were practical. If anything, Little said, the dreams of the Class of 2001 are more possible than ever for having been at Harvard.

Instead of letting go of dreams to follow a practical road, Little urged his classmates to follow their passions.

“Those dreams are not just dreams, they are the blueprints of a life worth living,” Little said.

From Little’s philosophical presentation, the next speaker was just plain weird. Novak, one of the Class of 2001’s clowns, kept the crowd laughing with the Ivy Oration. Novak reflected on: