Fineberg to conclude service as provost 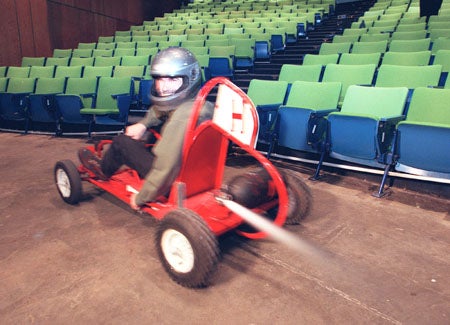 When he was 17 years old, Wolfgang Rueckner did not build a go-cart for the science fair. He decided to build an ion rocket engine instead – the ones that can propel a rocket in the vacuum of space. So, he wrote NASA and they sent him some research papers, and young Wolfgang “obtained a huge sewer pipe from the city, sealed it with boilerplates, and somebody gave me a very crude pump, so I pumped it out.” Then he boiled mercury in a flask to vaporize it and bombarded it with electrons until it got ionized, and voila! The experiment worked, and it looked memorable, too – that glowing trail of blue ionized mercury vapor processing eerily through the sewer pipe.

Wolfgang Rueckner continues to perform memorable demonstrations, not for the high school science fair but for thousands of undergraduates in physics and other classes at Harvard. Rueckner is the manager of lecture demonstrations and instructional laboratories in the physical sciences. He and a crew of three design demonstrations that are safe and often spectacular enough so students remember them long after they’ve forgotten just about everything else they learned in college. Despite his neat, gray turtleneck and trim, gray beard, Rueckner looks 17 again as, eyes glowing like bunsen burners and his talk punctuated with easy laughter, he describes a couple of the things that students are not likely to forget.

Shooting the monkey: To demonstrate that all objects on the Earth fall at the same rate. “First we suspend Curious George from the ceiling. Then we aim our cannon at him. The cannonball is an inch-and-a-half steel ball bearing. The cannonball shoots out in a beautiful parabolic trajectory while the monkey is released from the ceiling.” The monkey gets hit every time.

The rocket cart: To demonstrate that every action has an equal and opposite reaction (or, “he’s not in high school anymore but it’s never too late to ride a go-cart”). For this demonstration, Rueckner explains, “We get a CO2 fire extinguisher, from which we remove the restriction nozzle that prevents, in ordinary use, the CO2 from emptying out too fast.” So, when the driver of the go-cart (usually the professor) squeezes the nozzle, the cartridge empties very rapidly indeed, “leaving this marvelous plume of CO2, a big cloud of gas that propels the go-cart directly towards one of the closed exit doors of the lecture hall.” Unbeknownst to the enthralled hall of students, there’s a “pit crew” behind the door who open it at the last moment and let the professor and cart whiz through. The class then hears the sound of an accident (an armful of steel pipes dropped to the ground), followed after a little delay by a lone tire that rolls slowly back into the room, wobbles once or twice, then keels over, thus ensuring that 200 students, at least, will never forget Newton’s Third Law.