The answers to these questions and many more can be found in a remarkable exhibition at the University Archives in Pusey Library – “The Chest of 1900.”

The items in the exhibition have been culled from diaries kept by 72 students, staff, administrators, and faculty members for the month of March in 1900. Students were asked to write in-class essays which were also placed in the chest, along with a diary of the Cuban Summer School (a special summer session for more than 1,200 Cuban schoolteachers), records of the Ten O’Clock Club, and copies of all University publications for the month. 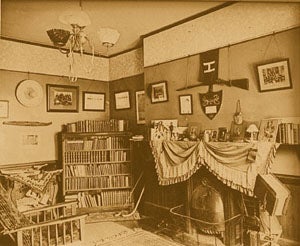 At left is a Harvard student’s room as pictured in 1900, and, above, a hand-stitched Harvard flag from the same era. (Staff photos by Rose Lincoln)

The chest itself – a battered wooden box that looks as if it had seen hard service prior to its incarnation as a time capsule – sits with lid agape behind the glass of the exhibit case, emptied of the dozens of diaries, essays, and photographs that lay safely locked in its interior for more than 60 years. The chest was first opened in the early 60s, but its contents have not been exhibited until now.

These personal writings, reflecting the daily concerns of Harvard students, faculty, and staff during March 1900, occupy the bulk of the exhibition, augmented by items of Harvard memorabilia – pennants, sweaters, baseballs, and the like.

Coinciding with the exhibition, the University Archives is inviting the Harvard community to contribute to “The Chest of 2000.” Like its predecessor, the new project will collect materials that reflect life at the dawn of this century, then seal them to be opened by archivists several generations from now.

“‘The Chest of 2000’ will join the ‘Chest of 1900′ among the Archives’ permanent holdings,” said cataloger Lewis Day, who curated the “Chest of 1900” exhibition and is organizing the new project. “We’re not sure how much stuff we’ll get, but hopefully it will include the same sort of materials – diaries, letters, photographs. People can afford to be candid because the chest won’t be opened in our lifetimes.”

Day suggests that would-be contributors visit the current exhibition to get ideas about the sorts of experiences and observations they might choose to record. The exhibition will be open through January. Contributors to the “Chest of 2000” will have until the end of February to make their submissions.

To-day I had an excellent practical joke played upon me over in Thayer. The fellows have been laying for me for two weeks but the conditions were not right until to-night. The idea was to stick a tin funnel into the band of your trousers and try to drop a coin from your chin into the funnel. While my head was bent back with the coin on my chin, one of the boys kindly poured a pitcher of water down the funnel. The room was full of men and there I stood with the water running down inside my trousers. But I did not get mad, Oh! No I took the Joke and let them have the laugh on me. They say this is a very ancient joke, but I never heard of it before.
Alfred Marston Tozzer
Tuesday, March 13, 1900

There is a very bright negro in college  Roscoe Conkling Bruce. His father was a remarkable man. He was elected to the United States Senate from Mississippi in the reconstruction days. Sentiment was then very strong against colored people and when upon the day that he was to take his oath of office his colleague from Mississippi refused to escort him to the front of the house. An embarrassing silence fell over the chamber till Senator Roscoe Conkling of New York jumped up and extending his arm to the colored Senator, escorted him forward. Bruce was so grateful that he named his son for the gentleman from the Empire State. Blanche K. Bruce afterwards became Registrar of the treasury and his name became known everywhere. Roscoe Conkling Bruce was on the debating team this year that defeated Princeton. He is a fine speaker and is thought much of by his fellows. He is singularly retiring in private life and apparently does not see even his friends on the street  if they are white men  unless they first recognize him.
Harry Kellogg Durland
Wednesday, March 21, 1900

I’m going to tell you a little about Prof. Kittredge, our English professor, and my love. He has the Shakespeare class and if Shakespeare knew as much about what he was writing as Prof. K does, he was indeed a wonder. Prof. K really knows about everything. I can’t bear to think of how much poorer the world will be after he dies and he doesn’t take a bit good care of himself either – sits up till 2 a.m. and lives on black coffee and cigars. He’s also the most patient man I ever saw.
Anna Belle Eisenhower
Monday, March 12, 1900