By Story and photo by Rose Lincoln Gazette Staff 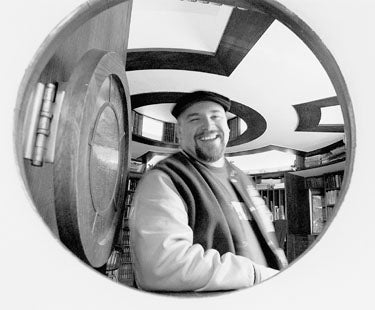 When curator Joe Hickey found the original 1909 architectural plans for the Harvard Lampoon building where he works he rolled up his sleeves and got down to business.

According to the plans, the ears on the face of the Mt. Auburn Street building shot out steam on every hour. When Hickey dug into the records he discovered the reason for the shooting steam was not aesthetic but rather to save money – and “snub” the University.

The plans, written by founding member Edmund M. Wheelwright, stated that steam would enter through underground pipes from the building across the street. In 1909, bills for steam heat were assessed by measuring the steam that came through the “return line” in the form of vapor. If there was no return vapor the user could not be charged. So each time the face on the facade of the Lampoon shot steam out its ears, the Lampoon staff simultaneously saved money and tweaked the University by avoiding the return line.

With ease, Hickey reels off incredible and obscure facts about the Lampoon’s past. And he proudly proclaims it as the place where the creators of David Letterman’s Top Ten List got their start, where the writers of “The Simpsons,” “Saturday Night Live,” and “Seinfeld” once worked and partied.

Asked why a student chooses The Lampoon over the student-run newspaper, The Crimson, Hickey confidently replies: “If you want to become rich and famous you start at the Lampoon.”

Hickey’s dedication to the Lampoon is evident everywhere around the historic building. From the recently constructed wood coverings for all the radiators to the restored Senior Dinner poster he found in the basement. The poster had a dark liquor stain covering a portion of it, and when restored, showed 1954 Lampoon President John Updike’s signature and a drawing of himself in the upper corner. It now hangs on the wall with other memorabilia. Drapes cover the second-floor windows to discourage peeping. When the drapes are open, memorabilia such as the Updike poster are visible on nearly every inch of wall space and are well-protected by the UV glass Hickey has recently installed.

As Hickey leads a recent visitor through the venerable structure, he remarks on the daily surprises he encounters in his job at the Lampoon. “This place becomes their home,” says Hickey of the students who work there, “not their dorms, but here at the Lampoon.” Almost on cue, he switches a light on in a room in the basement. A student wrapped in a sleeping bag is asleep on a shelf. Hickey apologizes to the student, shuts off the light, and the tour continues.

When returning graduates stop by to visit, it’s Hickey they recognize and share a beer with. Besides the returning alums, Hickey and the Lampoon staff have played host to such notables as Aerosmith, Updike, John Irving, Tom Wolfe, Phil Hartman, Conan O’Brien, and Mr. T.

When the Lampoon hosts an awards dinner, gentlemen arrive in tuxedos and ladies in gowns and tiaras. Candles light the rooms. While little electricity is used for the lighting, it’s most emphatically used to power the $5,000 speakers that blare music and rock the many parties.

Hickey has just two predecessors: Elmer Green, who died in 1977 with a Lampoon staffer at his bedside, and Bob Stewart, who was curator before Green and whose dedication was such that he officially changed his name to Bob Lampoon. The basement room where Green lived for 50 years (and for more than half of that time on a dirt floor) has been named for him.

Hickey watches over “The Elmer Room” and all the rooms of the building and joins in the fun at every Lampoon event, but unlike his predecessors he does not live in the basement and has no plans to change his name.

In 1998, when multimillionaire alumnus Bill Vogel came to visit, Hickey mentioned what he’d found in Wheelwright’s 1886 architectural plans. Armed with Vogel’s financial backing and encouragement, Hickey purchased and installed a steam generator, wiring it to a timer and once again, as in days gone by, for five minutes before each hour, the funny face called The Lampoon spews steam out its ears.

Ideas for a Big Picture subject? Send them to thebigpicture@harvard.edu