Physicist draws on left side of brain

A molecule streaks in from the right, smashing into a smaller molecule entering from the top. A third strikes the two as they briefly merge, sending all three on their separate ways, down and out of the frame.

When all is said and done, the action – incredibly violent but taking place on a scale too small to see – is over in an instant. All that is left is “Collision.”

“Collision” is a ropelike rainbow of red, blue, green, yellow, and orange against a misty gray background. It’s an artistic interpretation of the meeting and parting of these tiny particles, with strings of color tracing the molecular paths as they enter and exit the picture.

It not only looks cool, it’s accurate, too.

The artist is Harvard physicist Eric Heller. Heller, a professor of physics and chemistry, has been expressing his artistic side. But instead of daubing watercolors on an easel, Heller generates his images on computers. And instead of painting a daisy-stuffed vase sitting on a gauzy tablecloth, Heller’s models are the particles and waves of the world of physics.

“I’ve always loved the graphic arts, I’ve always used them to illustrate my work,” Heller said. “Once in a while, I’d spin one off that’s over the top.”

Heller said he’s been doing art for many years, but it’s only been in recent years that computers and printers have become powerful and versatile enough for this art to really blossom.

The walls of his Mallinckrodt Laboratory office are adorned with large, black-framed versions of his work, sharing wall space with enlarged landscape photographs taken by Heller. Stacked carefully by the door are images being prepared for exhibition at the M.I.T. Museum early next year.

The exhibition, featuring 38 Heller works and four from selected other artists, is being funded by a $50,000 grant from the National Science Foundation as a way to promote public education about physics, according to M.I.T. Museum curator Janis Sacco.

“It’s very striking work. I have a lot of people pass by and say ‘I just love this stuff.’ It has a great deal of appeal to the ordinary person,” Sacco said. “One thing we specialize in is the juxtaposition of art and science. For us, it’s a natural marriage.”

Though the art – replete with swirling, otherworldly veils and colorful, unusual patterns – draws the eye on its own, Sacco said the work’s strength is most evident when the viewer asks, “What is it?”

It is at that point, Sacco said, that interest often deepens, as the viewer seeks to understand and visualize the powerful natural processes depicted before them.

“This actually enhances the appeal of the art,” Sacco said. “They have a lot more questions [after finding out what the image depicts].”

Heller’s art flows from his work, which focuses on atomic physics and the mysterious world of quantum mechanics, where all matter is seen as waves. Recent work has investigated collisions between ultra-cold atoms and something called “quantum chaos,” where small changes in initial conditions result in large changes in outcomes. 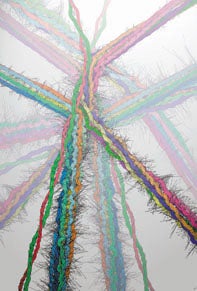 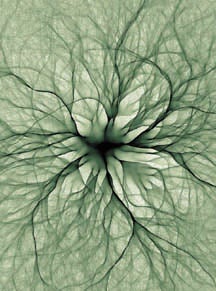 That principle is depicted in “Collision,” which was created by making 16 different frames and pasting them together, Heller said.

“It’s one of the themes that (runs) through all the work on chaos. If I had changed just a little bit where the collision happened, or the position of the atoms, the outcome would be dramatically different,” Heller said.

The exhibit opens Feb. 13 in the M.I.T. Museum’s Compton Gallery and runs through May 6. After that, it goes on the road for two years, with stops planned so far at the Chicago Academy of Sciences, the National Academy of Sciences in Washington, D.C., and the Edgerton Explorit Center, in Aurora, Neb.

While his work is based on science, Heller said he takes enough artistic license – adding colors and combining elements from different compositions – that the images would be inappropriate for an official scientific publication. Still, the idea that clear, engaging graphics can help get a point across is taking root in the physics community.

“There was a time when good graphics was seen as somehow frivolous and unscientific. I’ve made discoveries that somehow my colleagues have missed because of good graphics,” Heller said. “I think most of my students have become convinced that better graphics means better communication.”

Scot Shaw, a doctoral student in physics who is working with Heller, said he had an appreciation of the importance of clearly illustrating one’s work when he arrived at Harvard. Heller’s dedication to the idea was one of the things that drew Shaw to work with him.

“When presenting work in any fashion, one of the challenges is presenting what I understand in ways that other people can understand,” Shaw said. “When it comes to density of information in a single picture or page, well-done graphics is the best way to do that.”

Shaw said he enjoys Heller’s art, but unlike more casual viewers, he immediately sees the science there.

“For me as a scientist, I look at it and see the science behind it. It’s also very visually interesting,” Shaw said.

The M.I.T. Museum show isn’t the first for Heller’s art. It was displayed last year at M.I.T.’s Center for Theoretical Physics and is currently on display in the Physics Department office. A gallery of images is also available on the Internet at http://monsoon.harvard.edu/images-ejheller/.

Though Heller’s artwork has become popular in recent years, he’s not thinking about joining an artists’ colony just yet. His art, he said, comes from his work. And he is first and foremost a physicist.

“I’m not flaking out here. I’m doing what I’m supposed to be doing. I take my teaching and research duties very seriously,” Heller said, adding that the artistic recognition came so quickly, he really hasn’t paid his dues yet. “It just happened like falling off a chair. People love it. People want to know what it is.”

While a sidelight, Heller said his artwork serves an important purpose. It doesn’t just educate the public about physics, it engages them and interests them in what’s going on at the atomic level.

“I really am trying to reach the public and get them interested in science,” Heller said. “If you could get someone and draw them in for aesthetic reasons and they ask, ‘What is this?’, then you got them.”