University-based research – responsible for the Internet, organ transplants, and the vaccine that changed polio from a scourge into an afterthought – is regaining favor in Washington, D.C., and winning federal budget increases after a decade of slow- or no-growth funding.

The federal budget’s switch from deficits to surpluses combined with an education campaign on the importance of federally funded research have convinced Congress and the Clinton administration that science should be among the top priorities for new federal spending. That is a long way from the early 1990s, when federal budget projections showed research budgets decreasing by as much as 20 percent over several years.

“In the early 1990s, there were very dark clouds on the horizon,” said Harvard President Neil L. Rudenstine. “We needed to make a more comprehensive and effective effort to make the case of the value of the federal investment in university-based research. Thanks to the support of many institutions, the effort was extremely successful.” 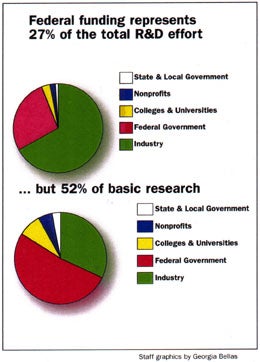 Federal dollars are badly needed today as researchers rush to take advantage of the technological explosion that has opened many new frontiers, but which has also created new, expensive technology needed to explore them.

This year the turnaround has been most striking in the physical sciences, such as physics, mathematics, engineering, and applied sciences, whose research is largely funded by the federal Departments of Defense and Energy, by NASA, and by the National Science Foundation (NSF).

Of the four, the National Science Foundation has seen the largest increase this year, 13.6 percent, and discussions are beginning among powerful Congressional leaders that could result in future increases that would double its budget within a decade.

“It’s a very important and gratifying turnaround,” said Nils Hasselmo, president of the Association of American Universities (AAU), an organization of research universities that includes Harvard. “If you look at the situation five or six years ago, everyone thought it would be disastrous.”

The budget increases for the four federal agencies this year take a step to equalize treatment of the life sciences and the physical sciences. The disparity of funding between the two had been growing wider with each passing year.

The lean times for the life sciences ended three years ago. That was when a consensus developed that funding for the National Institutes of Health (NIH) should be doubled over five years.

Those increases were approved to let researchers take advantage of exciting new advances in biological and medical research, such as the deciphering of the human genetic code, which some believe will lead to new treatments and cures for disease.

This fiscal year, which began Oct. 1, will likely mark the third year that Congress and the Clinton administration have kept their budget-doubling promise. In a budget bill that was under discussion before the election, the NIH budget was slated to increase by 15.2 percent, to $20.5 billion, making it by far the largest source of government funds for university-based research. However, since Congress returned from the election break, discussions have included talk of trimming the agency’s budget increase.

The case for investing in the life sciences was successfully made to Congress several years ago, but funding for the physical sciences was a harder sell.

That is because the advantages of developments that can cure disease are obvious, while the payoffs from funds spent on particle physics or Knot Theory are more obscure and potentially lost on a member of Congress balancing many budget priorities.

That’s where the outreach by scientists, universities, and businesses played a pivotal role. Those voices convinced Congress that even though payoffs for different types of basic research can’t always be readily foreseen, they’re nonetheless there. 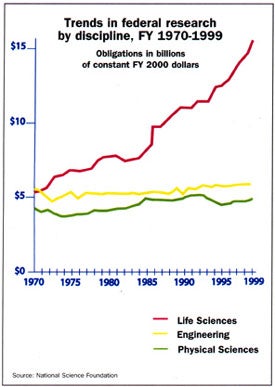 Without powerful computers, for example, much of the incredibly complex work on the human genome would be plodding along far behind where it is today. Without advances in imaging technology, physicians would be evaluating patients without the internal view of soft tissues provided by magnetic resonance imaging.

“Basic science, the random, dispassionate search for truth, can lead to fundamental discoveries that can produce paradigm shifts in our understanding of the nature of the universe and the very essence of life. Basic science research can also drive new technologies that are incorporated into the development of novel diagnostic and therapeutic agents for diseases,” said Bertha Madras, professor of psychobiology in Harvard Medical School’s Department of Psychiatry.

That the case has been made is evident in funding for the budgets of the major federal grant-making agencies. As noted, the National Institutes of Health budget is expected to increase substantially.

Furthermore, funding for the National Science Foundation, which funds research in many disciplines, increased to $4.4 billion, the largest yearly increase in the foundation’s history.

Research budgets within the Department of Energy, the Defense Department and the National Aeronautics and Space Administration all saw increases larger than inflation. Budget increases ranged from 5 percent for NASA to as high as 30 percent for the Energy Department’s Basic Energy Sciences program.

Federal budget decisions were made amid a coordinated campaign to educate the public, Congress, and the administration about the benefits of science.

“It’s an enormous and gratifying turnaround and it’s been partly due to the availability of resources but also to a new awareness on the part of congressmen,” Hasselmo said.

In the past, scientific disciplines had competed with each other for what was seen as a limited pool of money. In recent years, the disciplines joined forces and recruited allies in industry – dependent on basic research for discoveries that can be turned into marketable products – to push for a bigger pool of money.

“Research funding is critically important to the technology economy,” said Jim Klocke, director of government affairs and economic development for the Greater Boston Chamber of Commerce. “It’s the seed corn of our economy and needs to increase well above the rate of inflation.”

The Greater Boston Chamber has helped create the National Business Coalition for Science, a group of chambers of commerce from areas across the country with a concentration of technology-related industries.

The growing business voice is one among a chorus that has grown rapidly in recent years. Harvard played a leadership role in the formation six years ago of The Science Coalition, an organization of research universities, nonprofit organizations, scientific associations, businesses, and industry groups. The Coalition has played a lead role in educating senators and representatives about the benefits of basic research to the nation’s economy, to its technological dominance in the world, and to its future.

Harvard’s involvement in the lobbying effort has largely taken place through The Science Coalition and through coordinated activities with the National Business Coalition for Science and the AAU, though individual professors and scientists have made their cases before congressional committees.

Rudenstine worked to create the Coalition and has several times traveled to Washington, D.C., himself to make the case for science funding. In 1999, Rudenstine led a group of university and industry leaders on a trip that included meetings with congressmen and senior administration officials.

Voices in Congress and elsewhere in the government were not silent, either. Former U.S. Rep. Newt Gingrich, a formidable budget-cutter himself, has been an outspoken supporter of science research funding. Other voices include Sen. Edward Kennedy of Massachusetts, Rep. John Porter of Illinois, Sen. William Frist of Tennessee, former NIH Director Harold Varmus, and Federal Reserve Board Chairman Alan Greenspan.

“When the NIH went on this path toward massive increases in spending, a number of very credible voices said to the president and Congress, ‘If we want to capture the potential of this, spending needs to increase in the other sciences,'” said Kevin Casey, senior director of federal and state relations for Harvard.

Medical and life science researchers say the commitment to double NIH funding over five years should help them take advantage of opportunities presented by new technology and recent discoveries such as deciphering the human genome.

“In this age of genomics and proteomics, the volume of data and our potential to solve genetically driven diseases will grow exponentially,” said Harvard Medical School’s Madras.

There is a concern, however, that funding remain stable even after the five years is over, since, in the fostering of research, consistency of funding is almost as important as the number of dollars spent. Large annual swings can cause a project to grow at an unsustainable pace in years of increased funding and derail new initiatives or force cutbacks in years with lower funding levels.

Joshua LaBaer, director of Harvard Medical School’s Institute of Proteomics, said the Institute is tackling a massive job that would be impossible without the prospect of federal funds.

The institute is a kind of DNA library where researchers interested in experimenting on particular genes or bits of DNA can obtain samples with which to pursue their work.

Currently funded by Harvard, the 2-year-old institute is at the point where it needs outside funding – as much as $100 million over time, LaBaer said. He envisions the institute blossoming into a multinational effort where scientists from all over the world can get materials for their genetic research.

“We’re now at a point where we need to get some significant money raised for this project,” LaBaer said. “My view is this will become the gold standard for biology. I think it will be a repository everyone will use.”