Filling a hole at Harvard: Andrew Murray wants help in understanding the mysteries of life 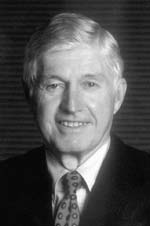 Genomics – the analysis, study, and manipulation of thousands of genes and biomolecular processes simultaneously – is expected to yield breakthrough treatments for diseases from cancer to Alzheimer’s in the coming years. With the recent gift of $25 million from Charles T. “Ted” Bauer AB ’42 endowing the Bauer Life Sciences Building that will house the Bauer Center for Genomics Research, Harvard will greatly strengthen its position in teaching and research in this field of exciting scientific possibilities. The gift is among the largest ever received by Harvard.

“What Ted Bauer has so vividly conveyed, through this extraordinary new gift, is that the life sciences, in general, are a vital part of a Harvard education and that genomics, in particular, is an area in which Harvard is poised to make significant new contributions,” said President Neil L. Rudenstine. “His vision for the kind of collaboration that can occur in a place like the Center for Genomics Research serves as an inspiration to the faculty and students who will work together at the center and to all of us who care about serious scientific inquiry.”

“Ted Bauer has made a wonderful contribution to Harvard and to the field of genomics, demonstrating his commitment to giving creative individuals the tools they need to make dramatic scientific discoveries,” said Dean of the Faculty of Arts and Sciences Jeremy R. Knowles. “While we can scarcely guess at the knowledge and the understanding that will come from the faculty and students working at the center, Ted has ensured that they will have the finest facility in which to explore this exciting territory.”

Genomics is fast becoming the basis for molecular medicine, pharmaceutical research and development, and advanced diagnostics. The Center for Genomics Research (CGR), launched by Dean Knowles in the fall of 1999, takes an innovative, interdisciplinary approach to the field, bringing together faculty, students, and independent researchers from a wide variety of disciplines – including biology, physics, chemistry, mathematics, computer science, and engineering. The center’s expressed goal is to synthesize a variety of experimental and theoretical approaches to solve the ultimate challenge of biology: to explain the behavior, function, structure, and evolution of cells.

“With Ted Bauer’s gift, the research conducted at the CGR will tackle three ambitious problems on one of the final frontiers of human knowledge,” said Andrew Murray, director of the Center for Genomics Research. “First, it’s going to enable us to understand how cells work in all their diversity and complexity, as well as allowing us to ask the philosophical question of what does knowing our own blueprint tell us about who we are. Second, it’s going to make an extraordinary contribution to how we think about evolution by telling us how we got here. By comparing the sequence of the genomes of different organisms, we can actually reconstruct a lot of what’s happened in evolution. And third, can we use genome-wide approaches to devise new methods that will pinpoint the molecular defects in human diseases and find new cures?”

The CGR features a fellows program, in which 10 research scientists are chosen (each for a five-year term) from among the most promising postdoctoral researchers in the world.

According to Murray, the fellows program is a key ingredient to the center’s mission. “In a sense, Ezra Pound’s famous motto ‘make it new,’ which he applied to art, applies equally to the sciences. And, in general, the people who make it new are the younger postgraduate scientists who are unencumbered by regular departmental duties.”

Saying he hoped his gift was “the mark of a friend,” Bauer stressed both his respect for Dean Knowles and the scientists working at the center and his belief that Harvard is the ideal setting for genomics research. “What really fascinates me is how they are going to run the center with the smartest young minds from every discipline working there together. I’ve always believed that people are the most vital part of any organization and I’ve always thought, in my business, that the best way to do things is to get the most creative thinkers you can, throw them into a problem headfirst, and let them go. I can tell you from experience that it works.”

Bauer’s gift will significantly enhance the center’s offerings to undergraduates. With the molecular and cellular biology department, the center is planning the world’s first experimental and theoretical genomics course. “In the near future, undergraduates will be able to do laboratory research at the center on exciting problems that they think of themselves,” said Douglas A. Melton, Thomas Dudley Cabot Professor of the Natural Sciences and chair of the Department of Molecular and Cellular Biology. “For example, one may want to probe the genomes of different organisms to ask, ‘Can I find genetic similarities or differences that would be correlated with a certain kind of animal form like the ability to make wings or legs?’ The opportunity to work on these kinds of experiments is not available to most undergraduates in the United States. Here, at Harvard, they’ll have the chance to do sophisticated genome interrogations, and this is truly exciting and remarkable.”

This new gift reflects Bauer’s enthusiasm for supporting young scholars. During The University Campaign, he helped set up the Financial Aid Challenge Fund, which inspired alumni and friends to contribute $230 million for undergraduate financial aid. Earlier this year, Bauer contributed a major gift to the University of Houston to endow the College of Business, which now bears his name. He also established the Charles T. Bauer Science Center at Roxbury Latin School, where he was a 1938 graduate and currently serves as a trustee. His company’s foundation supports a number of education programs for Houston’s minority population, including a scholarship program for students from predominantly Hispanic schools.

Two years ago, Dean Knowles announced Harvard’s intention to invest up to $200 million over five years to establish research centers in the natural sciences. In addition to the genomics center, this science initiative has provided funds for the Center for Imaging and Mesoscale Structures; a center for systems neuroscience is in the planning stage. The Bauer Life Sciences Building is slated for completion in early 2002.