Filling a hole at Harvard: Andrew Murray wants help in understanding the mysteries of life

Andrew Murray wants help in understanding the mysteries of life 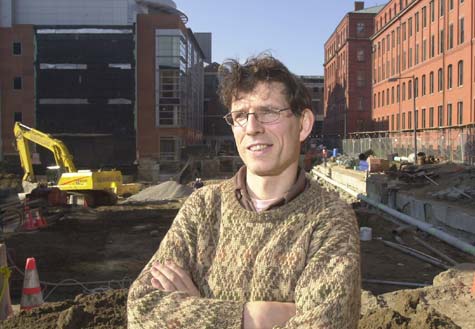 “I don’t have a job; I have fun,” says Andrew Murray, a newly appointed professor of molecular and cellular biology.

Fun for him is trying to change evolution, watching life develop in a test tube, and directing Harvard’s new Center for Genomics Research.

He admits that all this fun produces “days when I go home and think, ‘Why do I have to deal with so many problems?'”

But Murray is glad he came to Harvard after 14 years at the University of California, San Francisco (UCSF). “I’m driven by a passion to find general principles that underlie all of biology,” he says. “I believe such an endeavor requires input from physicists, chemists, mathematicians, computer scientists, and others. UCSF doesn’t have these departments. Harvard does. So the notion of coming here was very attractive.”

“Andy brings both energy and vision to the work that will make the Center for Genomics Research an exciting place for young biologists, chemists, physicists, and mathematicians in exploring how genes interact to give us all of life,” notes Douglas Melton, Thomas Dudley Cabot Professor of the Natural Sciences. “He is taking the lead in studying how an organism’s genome [all its genes] interact. This is one of the most exciting parts of modern biology.”

A junker in the yard

Tall and thin, Murray, 45, is a boyish, enthusiastic fellow with the energy and good humor of a kid in a candy store. From his corner office on the third floor of the Biological Labs, he can look out and see the hole that will eventually be the Life Sciences Building, future home of the Bauer Center for Genomics Research. Sitting there, wearing dark-rimmed glasses and casual clothes, he talked about his past, present, and thoughts of the future.

“There are two sorts of scientists,” Murray muses. “People who grow up playing with bugs and those who are interested in science simply from a fascination of how things work.” He falls into the latter group.

Murray was obsessed by cars, so for his 10th birthday his father drove a $10 junk van into the backyard. “I took it apart, but I never put any of it back together,” he recalls.

Murray grew up outside Cambridge, England. His father was an American studying Italian history at the Cambridge College of Arts and Technology. His mother, raised in Belmont, Mass., finished typing the last draft of his father’s thesis the night she gave birth to their fifth child.

In high school, Murray was as interested in the humanities as in the sciences. However, inspirational chemistry and biology teachers helped him choose a path. “My chemistry teacher quoted Shakespeare and showed me that scientists can appreciate the humanities, too,” he says. “Rather than give us standard canned experiments to do, my biology teacher let us design – and interpret the results of – our own experiments.”

At the end of high school, Murray had the opportunity to spend six months working part time in a cancer lab at M.I.T. “It was an incredibly stimulating experience,” he remembers. “It made me absolutely certain that I wanted to be a biologist.”

After getting an undergraduate degree in biochemistry from Cambridge University in 1978, Murray had to decide where to go from there. “In Britain when you apply to work with someone on a Ph.D., you talk to that individual for a day, then you have to sign away three years of your life on the basis of a slight acquaintance. I was more attracted to the U.S. system where you can put your foot in the waters of two or three labs before you make your final decision.”

However, Murray regarded the application process in the United States as a “fairly formidable obstacle,” so he only applied to two schools — Stanford and Harvard. Stanford couldn’t guarantee he would work with the people in whom he was most interested, so Murray came to Harvard.

He describes his first two years at the Division of Medical Sciences as “pretty hellish.” “Because I lacked focus, I spent those years on unsuccessful forays into different labs,” he says. “I finally found the right person to work for in Jack Szostak, a professor of genetics at Massachusetts General Hospital.”

In the course of probing the fundamentals of genetic inheritance, Szostak and Murray built the first artificial chromosome. “Other people had identified individual elements of chromosomes, so we stitched them together,” Murray explains. “They didn’t work at first, but we tinkered with them until the genes they contained could be transcribed into proteins necessary to sustain a living organism.” That work was completed by 1984.

Murray was regarded highly enough to receive an invitation to do postdoctoral research at UCSF from Marc Kirschner, who has since moved to Harvard and is now Carl W. Walter Professor of Cell Biology at the Medical School.

“I wanted to join the faculty of an undergraduate university,” Murray says. “But the quality of people doing research at UCSF, and the strength of the interaction and collegiality between them became more important to me.”

Life in a test tube

At Harvard, Murray continues studies he began at UCSF, and he has initiated new experiments on evolution. One of the problems of fully understanding evolution involves the impossibility of turning back time and seeing what actually happened millions of years ago. This drawback has led to intense debates about the details of evolution among biologists, and to claims by creationists that humans originated separately from other species.

Murray and his colleagues start at the near beginning of evolution by taking yeast cells and pressuring them to do things that they can’t do, or can’t do well, in nature. For example, the creatures are forced to survive on food they don’t normally eat.

“We’re profoundly ignorant of how this happens, and probably profoundly naïve as well,” Murray admits. “By calling on the expertise in evolutionary biology available at Harvard, we should be able to find out more about how evolution works. Showing that evolution can happen in a laboratory is a long step toward proving that theories like those of creationists are wrong.”

Murray also does experiments on how cells know when to divide and reproduce themselves. His team developed a system that allows researchers to watch frogs’ eggs replicate their chromosomes then divide them equally between two daughter cells.

“Cell division is very complex, and we’re interested in how genes control it,” Murray explains. “This involves a series of check points, whereby the cell checks to see if one thing is finished before it goes on to the next step in the sequence. If that doesn’t happen, chromosomes can be gained or lost. Such mistakes play a role in the generation of cancer tumors.”

To solve such basic problems, Murray is trying to stimulate interactions between various science departments. “Everyone I’ve talked to here [at Harvard] has been very welcoming, friendly, and fun to talk to about working with colleagues from other departments. The next step is to translate such personal ties into interdisciplinary action.”

All these activities do not leave much time for Murray to spend with his wife, Barbara, and their 18-month-old daughter, Phoebe. Nor does he get much chance to do things that he’s fond of – like photography, reading, and going to the theater.

He looks out a window at the construction going on and says, almost to himself, “I’d love to work with that beautiful old Roleflex camera that I inherited from my grandfather.”