Working their way to top 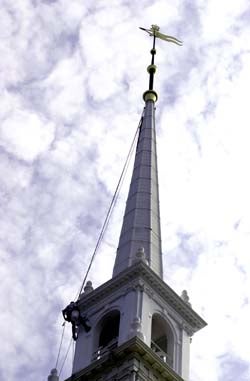 Rising to 265 feet, the church has the honor of being the tallest in New England. Its height includes the metal spire, culminating in a weather vane in the form of a medieval battle pennant topped by a large crown in which two openings form Greek crosses.

Its position atop the lofty spire as well as its shiny surface make the weather vane a prominent landmark, particularly in the early morning and late afternoon when the sun turns it to a shimmering gold flame against the sky.