With one collective eye focused on a controversial and colorful past and the other gazing ahead toward an uncertain future, some 600 African-American graduates of Harvard Law School (HLS), joined by their families and faculty members, gathered at the Law School last weekend to honor their rich history and to chart a course for those who will follow in their footsteps.

The first-ever “Celebration of Black Alumni” brought together a dynamic and diverse group of graduates and academics for a series of discussion panels, roundtables, and social events, culminating with a special tribute to the litigation team involved in the historic Brown v. Board of Education U.S. Supreme Court ruling in 1954.

“Among the ranks of this group are CEOs and general counsels of major corporations, leading partners in law firms, founders of significant enterprises, novelists, poets, film producers, television and radio personalities, social advocates, elected representatives, judges, and leaders in every other aspect, not just of the legal profession, but of American life,” celebration organizer David Wilkins ’80, Kirkland & Ellis Professor of Law, told the gathering during a welcome luncheon last Friday.

“In an age in which some people are asking the question ‘What has been the value of diversity and inclusion in our top institutions of higher learning?’ when you look around this room and you see the incredible accomplishments of those people who have come to Harvard Law School, particularly over the past 30 years or so, I think it answers that question.”

Wilkins also praised the school for recognizing the importance of the celebration. “It’s such a heart-rending moment because these are my classmates, former students, my friends, and my institution…To see this school and all of its faculty and all of its administration coming out to honor its legacy of graduating African-American students is one of the most exciting things I’ve ever experienced,” he said.

HLS, which was founded in 1817 and graduated its first black student, George Lewis Ruffin, in 1869, now counts nearly 1,700 African-American alumni. That is the largest number of black graduates from any law school in the country outside of Howard University in Washington, D.C.

“It’s a proud story. It’s a story of men and women who have struggled and suffered and persevered and prevailed. This is your story and your Law School is proud of you,” Coquillette told the alumni. 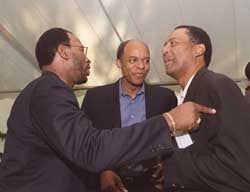 Jefferson, who almost missed his flight to Boston following a late-night session in the House on Thursday, spoke passionately about the opportunity to meet with his former classmates.

“I’m impressed with what they’re doing with their lives, what they’re doing with their families, what they’ve accomplished in their communities,” he said. “It’s quite a stellar list of people who came through Harvard Law School, so I guess this is just a chance to get together and network and see what others are doing, and to learn from their experiences, to share ideas, and to reminisce.”

For Jefferson, Harvard has become a family affair. Daughter Jamila graduated from HLS in 1997. Another daughter, Jalila, graduates from the Law School next year. His youngest daughter, Jelani, will graduate from Harvard College next year. “We’ve had a steady trek back and forth to this school, and for us, it’s more than a school that I went to. It’s a school that my family has been involved with since I left here,” he said.

Derrick Bell, HLS’s first tenured black professor, who left Harvard 10 years ago amid a flap over female faculty members, also attended the celebration, receiving a standing ovation at the luncheon. With his wife by his side, Bell renewed acquaintances with a long line of former students and colleagues, recalling the days when he led reform efforts at the school.

“I think my major contribution, certainly in legal education and possibly in my career, is to try to develop a model for the classroom that is more participatory, that is not as grade-oriented, that enables students to teach one another,” he said. “If I can be remembered as a pioneer in that, it seems to me that’s as important for that which I receive standing ovations.” 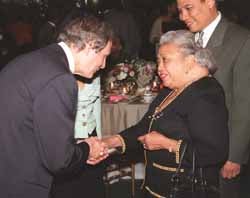 A series of heartfelt ovations greeted the recipients of the HLS Medal of Freedom, handed out during the gala celebration dinner on Saturday night. Eight surviving members of the historic Brown v. Board of Education litigation team, including William T. Coleman Jr. ’43 (46) and Charles Duncan ’50, and the relatives of four others, including Mrs. Thurgood Marshall and Charles H. Houston III, grandson of Charles Hamilton Houston ’22, were honored for their roles in striking down the “separate but equal” doctrine and opening the nation’s school house doors to black students.

Harvard President Neil L. Rudenstine and HLS Dean and Royall Professor of Law Robert C. Clark ’72 awarded the medals during the ceremony. Kenneth I. Chenault ’76, the CEO designate of American Express, delivered the keynote address. The evening concluded with music and dancing under the celebration tent at Holmes Field.

Wilkins, who began planning the celebration 18 months ago, called the weekend a tremendous success that “went beyond my wildest expectations.” As an encore he hopes to establish a series of regional meetings in the future, and a possible Website for black HLS alumni to maintain their connections both with the school and with each other.