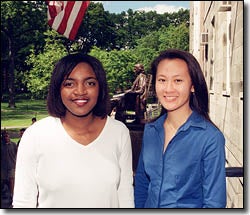 Juniors Fentrice D. Driskell (left) of Mather House and Nancy M. Poon of Dunster House are the 2000 David Aloian Memorial Scholars. Given by the Harvard Alumni Association (HAA), the award recognizes special contributions to the quality of life in the Houses and “thoughtful leadership that makes the College an exciting place in which to live and study.” Each House community nominates one House resident for the award. This year’s scholars and their House Masters will be honored at the fall dinner of HAA Board of Directors. Staff photo by Jane Reed 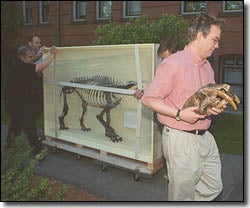 Workers move the skeleton of a 1 million-year-old smilodon californicus — a saber-toothed cat of North America — from the Museum of Comparative Zoology, where it has been in the company of scientists, to the Museum of Natural History next door, where it will be on public display. In its day — a good 1,000,000 years ago — this cat preyed on mammoths and other large-bodied mammals that were plentiful during the Pleistocene Era. Staff photo by Jon Chase 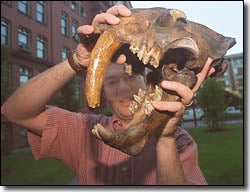 The University’s 1 million-year-old saber-toothed tiger made a move from the Museum of Comparative Zoology. Exhibits preparator Bob Davidson displays the big cat’s skull, which had to be removed from the body to protect it during transport. Additional photo on Page 11. Staff photo by Jon Chase 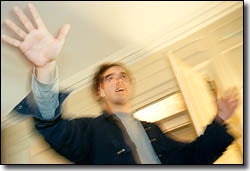