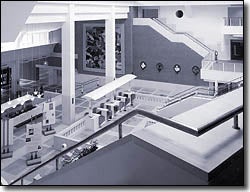 An interior view of the new British Library at St. Pancras, London. An exhibition, “Building the British Library: an architectural exhibition,” on display in the Corridor Gallery of Pusey Library through Friday, May 26, features original drawings, architectural models, and photographs that chronicle the building from conception through opening.

The new British Library at St. Pancras, London, is the only major public building to be built in Great Britain in the 20th century. No other project, since the building of St. Pauls Cathedral over 400 years ago, took so long to construct or was surrounded by so much controversy. Designed by Sir Colin St. John Wilson and opened in 1998, the library is now hailed as a great triumph of design and technology and is a showcase for British art, sculpture and tapestry as well as a great repository of library materials.

An exhibition, “Building the British Library: an architectural exhibition,” hosted by the Harvard College Library and featuring original drawings, architectural models, and photographs that chronicle the building from conception through opening, is on display in the Corridor Gallery of Pusey Library through Friday, May 26.

Following its Harvard opening, the exhibition will tour the U.S., with stops planned for Hunter College in New York City and the University of Chicago. The exhibition and tour are sponsored by the American Trust for the British Library. William Stoneman, librarian of Houghton Library, and Dennis Marnon, the administrative officer of Houghton, coordinated the exhibition at Harvard.

At a lecture in the Forum Room of Lamont Library on Wednesday, May 10, Sir Colin Wilson described the challenges he faced from changes in the location, size, proportions, and funding for the building to the scathing public criticism in the media of his knighthood at the direction of Queen Elizabeth. He delivered a fitting tribute to the vision of those who created the British Library, and the scholarly ambitions of those who now work in it.

The government-funded British Library is the national library of the United Kingdom and is considered one of the worlds top five research libraries, along with the Library of Congress, Bibliotheque Nationale de France, the New York Public Library, and the Harvard University libraries.

The Librarys collection has been developing for over 250 years and exceeds 150 million separate items. It includes books, journals, manuscripts, maps, stamps, music, patents, newspapers, and sound recordings in all written and spoken languages. The Librarys primary users are independent researchers, the academic community, the library and information science sector, and business and industry.