Rudenstine to Conclude Tenure as Harvard President in June 2001

“No one person deserves credit for all of that, and Neil would be the last person to claim it,” Stone said. “But, more than anyone else this past decade, he has put his mind, heart, and soul into making the whole of Harvard as good and as forward-looking as it can be, and the result is a thriving university with a future even brighter than its past.”

Strengthening Harvards resources: After designing and chairing an unprecedented cross-faculty academic planning process in the early 1990s, Rudenstine led Harvards first university-wide fund-raising campaign in modern times. It set a goal of $2.1 billion, the most any university has ever sought to raise. When it ended in December 1999, the campaign had surpassed that goal by more than half a billion dollars, amassing more than $2.6 billion in contributions from nearly 175,000 Harvard alumni and friends. Broad-based in its objectives, the campaign greatly enhanced student financial aid, added scores of endowed professorships, fueled an array of new educational and research programs, and enabled the creation of new or renovated space for the humanities and arts, the sciences, law, business, medicine, public health, executive education, and the libraries, as well as for student life.

During Rudenstines tenure, Harvards endowment has grown from $4.7 billion in 1991 to more than $15 billion, while the Universitys annual operating budget has grown from $1.2 billion in 1991 to roughly $2.1 billion. Through major increases in endowment spending, Harvard now covers a sharply higher proportion of its expenses from endowment income: a projected 28 percent this year, up from 18 percent in 1991.

Rudenstine has also worked to sustain and build federal support for university-based research, in part by helping initiate the nationwide Science Coalition in the mid-1990s, when such support was at serious risk. Harvards federally sponsored research support has grown to a projected $320 million this year, up from $200 million in 1991.

Fostering collaboration: From the outset, Rudenstine has placed a high priority on drawing together Harvards diverse parts into more productive collaboration. This emphasis has led to innovations in University governance such as the creation of the Office of the Provost, the Harvard-wide academic planning process that laid the foundations for the campaign, and reliance on the deans as a cabinet-like group for weighing matters of institutional policy. 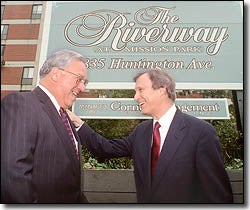 In programmatic terms, this university-wide consciousness has been evident in a growing number of interdisciplinary academic endeavors, intended to transcend conventional scholarly boundaries and to build Harvards strength in emerging fields. For example, the University Committee on the Environment and the Mind/Brain/Behavior Initiative, launched early in Rudenstines tenure, have each drawn faculty from across Harvard to pursue an ambitious research agenda, and have spawned new offerings in the undergraduate curriculum.

The Afro-American Studies Department, along with the Du Bois Institute for Afro-American Research, has drawn to Harvard what some have called a “dream team” of leading scholars and teachers, combining expertise in literature, philosophy, sociology, law, religion, history, anthropology, and other fields. The Hauser Center and the Social Enterprise Initiative together mark a new multidisciplinary thrust in understanding the role of nonprofit organizations in the United States and abroad, while the study of international human rights has crystallized as a common pursuit of faculty in law, public health, religion, and government. Other notable cross-disciplinary collaborations have focused on areas as diverse as chemistry and cell biology, inequality and social policy, ethics and the professions, and the well-being of children.

In 1999, Rudenstine announced the launch of a major new venture in interdisciplinary learning, the Radcliffe Institute of Advanced Study, created through the merger of Radcliffe College with Harvard. The new Institute, supported by a $300 million endowment, aims to create a community of fellows, faculty, and visiting scholars to pursue advanced studies across the full span of the arts and sciences and the professions. As an element of its broader mission, the Radcliffe Institute will carry forward a commitment to the study of women, gender, and society.

Harvards recent physical planning reflects the emphasis on collaboration. The Barker Center, for instance, now unites many previously dispersed humanities departments in a modernized complex close to Harvard Yard, while the planned Knafel Center envisions a common home for the Government Department and many of Harvard’s centers for international studies.

In 1999, Harvard stepped up its already strong program of aid for undergraduates, increasing the college scholarship budget by 20 percent and decreasing students dependence on loans and work to fund their education. During Rudenstines tenure, Harvard has more than doubled its support of need-based scholarships for undergraduates, now spending some $53 million a year, the equivalent of more than $1 billion in endowment funds. Annual applications to Harvard College have grown by nearly 50 percent, to more than 18,500, and the Colleges “yield”  the proportion of students offered admission who choose to enroll  has climbed to 80 percent, the highest of any college in the nation. 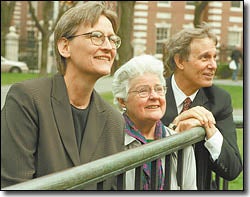 Rudenstine has also spoken and written widely on the educational importance of a diverse student body, and has been a leading voice in protecting the right of universities to continue viewing race and ethnicity among the many factors that may be taken into account in the admissions process. He has appointed the first two African Americans ever to hold Harvard’s most distinguished academic post, the University Professorship. During his presidency the number of women among Harvards senior faculty has more than doubled, from 85 in 1991 to 183 in 1999.

Information technology and the sciences: During Rudenstines tenure, Harvard has embarked on a range of initiatives to understand and take advantage of the Internet and other new information technologies. Harvards library system, the largest university library in the world, has converted its vast 14 million-volume catalog into electronic form, and is pursuing a “digital initiative” both to expand faculty and student access to online scholarly resources and to “digitize” key elements of Harvards massive collections. Within just a few years, course Websites, online discussion groups, and interactive computer-based curricular materials have become common features of students’ educational experience. Experimentation with new forms of Web-based distance learning is accelerating, especially in programs of professional education. The new technologies have themselves become a subject of focused study, through a heightened commitment to computer science and engineering, a new Ph.D. program in information technology and management, and a series of international multidisciplinary conferences on “Internet and Society.”

Meanwhile, in the Faculties of Arts and Sciences, Medicine, and Public Health, Harvard has initiated major new investments in the sciences, especially in such rapidly evolving fields as the understanding of the human genome, the science of the brain, the biology of degenerative diseases, and the study of extremely small (“mesoscale”) structures with great potential to spur technological innovation. Recent or planned new facilities in Cambridge will provide essential space for cross-disciplinary initiatives in the life sciences, the physical sciences, and engineering and applied sciences. The Medical Area has been augmented by major new research facilities for the Medical School (the Harvard Institutes of Medicine) and the School of Public Health (the Bagnoud Building). Planning continues for a new state-of-the-art medical research building intended to promote closer collaboration among basic scientists and hospital-based clinical investigators, in order to translate scientific advances more rapidly into effective medical treatments. Rudenstine has been active in efforts to bolster support for academic medical centers, particularly their vital research and educational activities, at a time of economic challenge for many teaching hospitals. 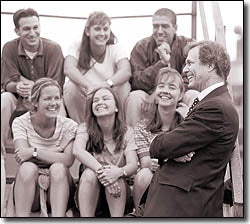 President Neil L. Rudenstine shares a laugh with students at a soccer game in 1995. Staff photo by Jon Chase.

Other major developments: Enhancing the quality of college life has been a continuing priority. Harvard Yard and the freshman residence halls have undergone comprehensive restoration efforts. Memorial Hall is now home to an elegant freshman dining hall, a student commons, and a meticulously restored Sanders Theatre. In addition, new arts space has been created through the renovation of Lowell Lecture Hall into performance and rehearsal space, and the conversion of the Adams House squash courts into studio space for visual artists. The annual springtime Arts First festival, initiated in 1993, has blossomed into a showcase for student productions in music, dance, theater, and the visual arts.

The Rudenstine years have featured a broad-scale effort to modernize Harvards world-renowned libraries, including major renovation projects completed or planned at Widener Library in the Faculty of Arts and Sciences, Langdell Library at the Law School, Countway Library in the Medical Area, Baker Library at the Business School, and Andover Library at the Divinity School. Harvards art museums have also experienced a fertile decade, adding significant new collections, creating a state-of-the-art conservation lab, and planning a new modern art museum on the banks of the Charles River.

Over the decade, Rudenstine has led searches for the deans of eight of Harvard’s nine Faculties, and has chaired more than 250 “ad hoc committees” to consider tenured appointments in the 31 departments of the Faculty of Arts and Sciences as well as in other fields.

Rudenstine, 65, attended Princeton as an undergraduate, was a Rhodes Scholar at Oxford, and studied for his Ph.D. in English at Harvard, specializing in Renaissance literature and writing his dissertation on the poetry of Sir Philip Sidney. After serving as an assistant professor at Harvard, he became a member of the faculty at Princeton, where he rose to become professor of English, dean of students, dean of the college, and provost. He served for three years as executive vice president of the Andrew W. Mellon Foundation, and together with colleague William Bowen wrote In Pursuit of the Ph.D. He took office as Harvards 26th president on July 1, 1991.