Internet is revolutionizing the way designers (and others) work

Rudenstine to Conclude Tenure as Harvard President in June 2001 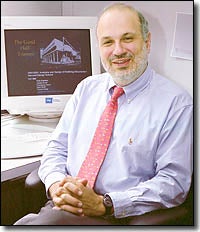 Spiro Pollalis, professor of design technology and management at the School of Design and co-chair of the Internet conference. Staff photo by Rose Lincoln.

When Graduate School of Design (GSD) Professor of Design Technology and Managment Spiro Pollalis was selected co-chair of the Third Biennial International Conference on Internet & Society (iS2k), beginning next week at Harvard, he didnt have to look very far to get his inspiration.

“We [in the design and construction industries] are living the [Internet] revolution as we speak,” Pollalis explains.

The revolution he refers to began seriously impacting architects and builders a few years ago, when a handful of Internet start-ups began offering online information services for document handling, coordination, and procurement. Soon, different companies were collaborating on different aspects of the same project online, using a variety of software applications.

Pollalis, who serves as director of the Center for Design Informatics at the GSD, estimates project management networks are now being utilized by as many as 10 percent of design firms, and those numbers are expected to mushroom in the years ahead. “We see the Internet as being the unifying part that brings the different organizations together,” he says.

What is occurring in the design and construction industries, Pollalis believes, is indicative of the expanding role the Internet will play in all business sectors in the not-so-distant future.

“Changing Our Lives” is the theme for this years “iS2k” conference, which runs May 31  June 2. Pollalis, who is co-chairing the event with Louise M. Ryan, professor of biostatistics in the Faculty of Public Health and the Dana-Farber Cancer Institute, believes the focus is appropriate, considering the limitless tentacles extending from the World Wide Web into all segments of society.

“The Internet is now our way of life,” Pollalis proclaims. “And that has caused us to treat this conference in a different way. So in a way, when we talk about the Internet and society, we are talking about life. I think the focus [of the conference] is to raise the issues and make people aware of the proper choices in the future.”

Among the panel discussion topics are the digital divide, the globalization of e-commerce, emerging Internet business models, and network-based learning. One panel will explore the “search for identity in the Internet age.” Another will delve into the emergence of so-called “e-service” companies.

The credibility of information, and the potential for information overload and censorship will also be addressed during a panel discussion titled “Right to know  how far does it go?”

“Theres the idea that there is too much information out there [on the Web], and we want to explore what that means to people,” Pollalis explains. “Whats useful, and whats not useful? Whats the danger?”

Other panel discussions will concentrate on the development of virtual communities, the role of the Internet in the 2000 presidential campaign, and the impact of the Internet on the built and natural environments.

“We plan to cover all these topics just by raising the questions,” Pollalis says. “I dont think we expect to find any answers, but we are creating a forum for discussion.”

Panel moderators and participants include a number of Harvard professors, lecturers, and Deans. Provost Harvey Fineberg will oversee one of the discussions, focused on higher education in the 21st century. Pollalis is elated with the high level of interest shown by his colleagues at the University.

“There are a lot of specialized conferences on the Internet these days,” Pollalis says. “One of the questions here is what makes us special, and its a very good question. In 1996 our conference was unique because we were one of the few to focus exclusively on the Internet, but now that happens all the time. So what makes the conference unique this year is that it has a distinct Harvard flavor. We want to take a more Harvard-wide approach to the different subjects, and we want to create the forum to discuss what the future holds for us.

As many as 1,000 leaders from business, law, health, government, media, education, and nonprofit sectors are expected to attend the three-day event. “Its a very balanced and multifaceted and pluralistic conference,” according to Pollalis. “Our target is to provide a neutral forum for the exchange of ideas on this very hot topic that changes our lives.”