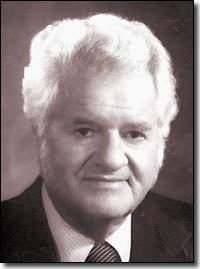 Reed Clark Rollins was born in Lyman, western Wyoming on 7 December 1911, and died in Cambridge, Massachusetts on April 27, 1998. He was one of the most influential botanists of his generation, influence that came from his solid scientific credentials, his superb administrative skills, and his engaging personality.

A son of a successful rancher and local politician, Rollins grew up in the rural environment of Lyman, which imprinted on him a great love for nature and the outdoors, and the deliberate, careful personality we often associate with farmers. He studied at the University of Larramie (today the University of Wyoming), receiving his A.B. degree in 1933. There he came under the influence of Aven Nelson, the well-known plant taxonomist, and Wilhelm Sondheim, the mycologist, who awakened in Rollins an interest in plant taxonomy and mycology. From Wyoming Rollins moved to the Washington State College (now University). There he came under the influence of a young instructor, Lincoln Constance, on his first job after getting his Ph.D. at the University of California in Berkeley. Constance and Rollins struck up an immediate friendship that would last all through their lives, and which would influence Rollinss career significantly. At Washington Rollins and Constance explored the area facilitated by “Reeds possession of a model A Ford car and my occasional success in wrangling small sums of money from the botany department to purchase the fuel to keep it running” in the words of Constance.

After a year in Pullman, Rollins made the decision to switch to vascular plant taxonomy. In 1936 he obtained his Masters degree based on a treatment of the genus Arabis in the Pacific Northwest. Lincoln Constance was then instrumental in getting Rollins admitted to graduate work at Harvard in the fall of 1936 with a very small stipend that created a great deal of hardship during that first Cambridge year. Admission to the Society of Fellows the following spring solved the financial problem and gave Reed three years to pursue his scientific growth and to broaden and develop other interests. He wrote a series of monographs on Cruciferae, pioneered in the new field of cytotaxonomy and worked on a monograph of the genus Arabis for his Ph.D. thesis. After completing his studies, he moved to Stanford University as an instructor and assistant curator in the Dudley Herbarium.

The clouds of the World War were looming in the horizon. When the war broke out Rollins joined the war effort as associate geneticist in the guayule rubber project in Salinas, California. As the Japanese had overrun the rubber plantations in the Far East alternative sources of rubber were sought. The guayule shrub from northern Mexico and the southwestern United States was a promising alternative but its yields were very low, in spite of two decades of genetic research. Rollins showed, utilizing his cytological skills, that the plant reproduced asexually, and consequently yields could not be improved by classical genetic methods. His work on the genus Parthenium is one of his most outstanding scientific contributions.

In the meantime Harvard had appointed Lincoln Constance as Interim Director of the Gray Herbarium for the academic year 1947-48, to advise and assist in the reorganization of the botanical establishment at Harvard. His recommendation to Harvard was to recall Rollins. Effective July 1, 1948, Rollins was appointed Associate Professor of Biology and Director of the Gray Herbarium, positions that he held until his mandatory retirement from administration in 1978.

At the time Reed Rollins assumed the directorship of the Gray Herbarium, botanical studies at Harvard were in a state of flux. Over the years various independent research institutes had sprung up including the Gray Herbarium, the Arnold Arboretum, the Farlow Herbarium, the Botanical Museum and the Bussey Institute (although the latter was not exclusively botanical). The Depression had shown the financial weaknesses of these institutes. Yet as they continued to grow and accumulate collections, there was great need for additional space. The University decided to build a new building for botanical collections adjacent to the Biological Laboratories. Although by the end of 1949 plans for the new building had been completed, actual construction was delayed until 1953, and the building was finished a year later. The new building housed the herbarium collections of the Gray Herbarium, Arnold Arboretum, and the Oaks Ames Orchid Herbarium, and the extensive and rich library of the Gray Herbarium and a large part of that of the Arnold Arboretum, as well as the paleobotanical collections of the Botanical Museum. Throughout the ensuing period of consolidation and integration Rollins provided inspired leadership by his untiring dedication to creating a strong botanical faculty at Harvard.

In the early fifties some specimens of Cruciferae were sent to him from Tennessee that set him on a fruitful investigation of the genus Leavenworthia and Lesquerella. Field studies around the Nashville Basin showed that some of the problems in delimiting species were due to hybridization. As torrential rains from their upland allopatric localities washed seeds of these species downstream they formed mixed populations in the floodplains of the Stones and Harpeth Rivers and some of their tributaries. By careful and patient analysis Rollins identified the characteristics of the putative parents of the hybrids and their backcrosses, later verified by experimental hybridization. Rollins later expanded the study to include the entire genus, culminating in the publication with Elizabeth Shaw of “The genus Lesquerella in North America” published by the Harvard University Press. Monographs of Leavenworthia, Cremolobus, Mathewsia, Pennelia, as well as genetic studies of Parthenium were produced by Rollins in these years. After his retirement he initiated the massive undertaking of writing a treatise at the generic level of the Cruciferae of North America, a task that he completed in 1993.

Rollins was called to occupy positions of responsibility in both national and international scientific bodies. He was president of the section on nomenclature of the Xth and XIth International Botanical Congresses in 1964 and 1969, and vice president of the XIIth Congress in 1975. He was elected a member of the National Academy of Sciences and the American Academy of Arts and Sciences. He was elected president of several societies, among them the American Society of Naturalists and the Botanical Society of America. He was awarded the Centenary Medal of the French Botanical Society and the Certificate of Merit of the Botanical Society of America. But of all the honors he received, the one he most appreciated was being named distinguished alumnus by his alma mater, the University of Wyoming.