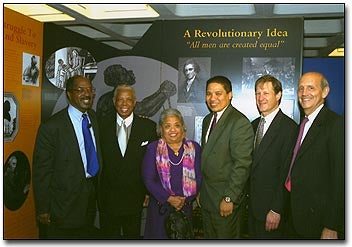 The celebration was part of the HLS Black Law Student Association’s Spring Conference, which, in conjunction with several Harvard organizations, sponsored numerous events. Among them was “Meeting of the Minds: A Conversation Among Great African-Americans,” which featured several faculty who assumed the mindset and persona of a famous African American from history. The participants, in the roles of the historic figures, held a contemporary conversation with each other as though they were meeting for the first time. Participating faculty included Ogletree, Evelyn Brooks Higginbotham, Randall Kennedy, David Wilkins, Henry Louis Gates Jr., and Cornel West. Photo by Tony Loreti