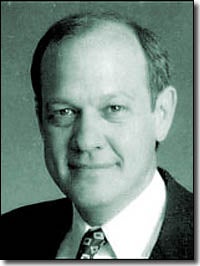 Alex S. Jones, a Pulitzer Prize-winning journalist and host of PBS Media Matters, has been named the new director of the Joan Shorenstein Center on the Press, Politics and Public Policy at the John F. Kennedy School of Government, Dean Joseph S. Nye Jr. announced Wednesday.

“Alex Jones brings a breadth of knowledge and prestige among his peers that will further enhance the Shorenstein Centers reputation for excellence,” said Nye.

Jones, who is currently the Eugene C. Patterson Professor of the Practice of Journalism at Duke University, has worked as a journalist, author, broadcaster and academic and has made a specialty of covering the media. Frequently interviewed as an authority on media issues, he is a member of the fourth generation of a Tennessee newspaper family and remains active in the ownership and management of the familys group of newspapers and radio stations.

“The Shorenstein Centers job is to illuminate how the press affects politics and public policy,” said Jones. “Today, that is an excruciatingly tangled relationship, but it is fundamental to an understanding of how our society works and how it will evolve. There has never been a time when the Center was more needed. We have an exciting and  I think  essential job to do.”

Jones covered the press for The New York Times from 1983 to 1992 and was awarded the Pulitzer Prize in 1987, for his articles on the collapse of the Bingham familys newspaper empire in Louisville, Ky. Together with his wife, fellow journalist Susan E. Tifft, Jones co-authored a book on the subject titled The Patriarch: The Rise and Fall of the Bingham Dynasty. Among other honors, this book was selected one of “The Ten Best Business Books” of the year by Business Week magazine and was named by The New York Times as one of 1991s “Notable Books.”

Jones and Tifft are also the co-authors of The Trust: The Private and Powerful Family Behind The New York Times, a biography of the Ochs and Sulzberger family that has owned The Times for over a century. The Trust was one of five books nominated for this years National Book Critics Circle award in biography. Time magazine chose The Trust as one of the “five best non-fiction books of 1999,” and The Los Angeles Times, The New York Times, The Christian Science Monitor, and Business Week also selected it as one of the years finest books.

Jones is also host and executive editor of PBS Media Matters, a magazine-style television program of media criticism in the style of 60 Minutes.

In January 1998, Jones and Tifft were jointly named Eugene C. Patterson Professor of the Practice of Journalism at Duke University. The Patterson chair, which is part of Dukes Sanford Institute of Public Policy, is endowed by The St. Petersburg Times, where Patterson was an editor.

From 1993 to 1997, Jones was host of National Public Radios On The Media, a live two-hour weekly program produced at WNYC, New York Citys public radio station. On The Media examines all aspects of news coverage and media issues affecting news.

Jones is on the advisory board of The Columbia Journalism Review, Committee of Concerned Journalists, and the Bertelsmann Foundations New York Media Project. He is also on the board of the International Center for Journalists. Jones will join the Kennedy School in July.

The Joan Shorenstein Center on the Press, Politics and Public Policy is a research center dedicated to exploring the intersection of press, politics and public policy in theory and practice. The Center strives to bridge the gap between journalists and scholars and, increasingly, between them and the public.