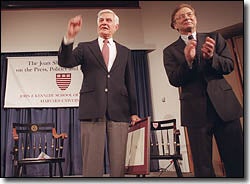 In September, Nieman Foundation for Journalism Curator Bill Kovach announced his plans to leave Harvard in June. Tributes and accolades ensued, most recently the 2000 Goldsmith Career Award for Excellence in Journalism, presented to Kovach in a March 9 ceremony by the Kennedy Schools Joan Shorenstein Center on the Press, Politics and Public Policy.

The Nieman curatorship might have been a fitting capstone to Kovachs career. The F oundations purpose, according to Agnes Wahl Nieman, who endowed it in memory of her husband, Milwaukee Journal founder Lucius Nieman, is “to promote and elevate the standards of journalism and educate persons deemed especially qualified for journalism.” No one in American journalism today has hewed more closely to those principles than Kovach, before and after his appointment as curator, and the job seems almost to have been designed with him as model.

“Bill Kovach is what the Founding Fathers had in mind when they gave us these great freedoms,” David Halberstam said in a quote read for him at the Goldsmith ceremony.

Kovach quit his first reporting job  at the Johnston City, Tenn., Press-Chronicle  because the editors wouldnt let him write about civil rights. He left the editorship of the Atlanta Journal-Constitution in a dispute with the papers owners over editorial independence. And, while at Harvard, he helped form  and, with former Los Angeles Times reporter Tom Rosenstiel, still leads  the Committee of Concerned Journalists, a group whose mission is to uphold the best practices of journalism.

Both as a leader in his profession and as leader of the Nieman Foundation, Kovach has drawn the admiration of journalists around the world. In remarks during the presentation of the Goldsmith Award last Thursday, Thomas Patterson, the Shorenstein Centers acting director, read an encomium to Kovach from New York Times Managing Editor Bill Keller: “Bill was such a good [Times] Washington bureau chief that the entire cast of forty egomaniacs, malcontents, idiot savants, sawhorses and grinds, novices and burnout cases employed at the Times bureau worked at about one hundred and twenty percent of their ability because they wanted to make him proud.”

But, honored as he is by awards and other displays of professional admiration, Kovach isnt letting the capstone fall just yet on his long and influential career. Even as he turns his Nieman duties over to his as yet unnamed successor, he is gearing up to continue his work on behalf of the free press.

Along with Howard Gardner of the Graduate School of Education, William Damon of Stanfords School of Education, and Rosenstiel, Kovach is developing a curriculum to define the purposes of journalism. The intent, he says, is to take the lessons into the boardrooms of corporations such as Disney as well as into the newsrooms. Those boardrooms, he says, are inhabited by “people who know nothing about journalism but make decisions that fundamentally affect the news organizations in their corporations.”

Kovach acknowledges that the learning curve might be steep for those at corporate pinnacles. Noting that competition in communications is now worldwide, he says, “There is a sense among the movers and shakers that [the competition] requires enormous amounts of money  and it does. There is pressure to use journalism in this enterprise.”

He points, as an example, to media executive Rupert Murdochs decision to remove BBC content from his satellite television service in China after the Chinese government objected to BBC news reports. “Its making decisions like that in service of a greater economic impact thats the root of the problem,” Kovach says.

Still, Kovach says he can make an effectively cold-blooded case against such decisions, in terms that the Murdochs of the world can appreciate. “Whats the self-interest that will operate here? The self-interest is survival,” he says.

Kovach compares todays economic climate to the 1920s, and he predicts that when the economy sours many media outlets that have staked themselves on “info-tainment” will fall by the wayside. Just as yellow journalists such as William Randolph Hearst were pushed aside by those like New York Times publisher Adolph Ochs, Kovach says, journalists will surface to supplant the info-tainers. And they will do so for the same reasons  remember, Kovach says, Adolph Ochs published “all the news thats fit to print” as a marketing tool.

“Its like an aircraft at the moment when it breaks the speed of sound; theres enormous turbulence,” Kovach says. “Thats what were watching now in terms of the economic and technological organization of the media. Once we pass through that, the ones that are going to come out the other end in a stronger position to move forward are the ones that have a brand that says, You can trust me. Theres no question about it in my mind. Were curious animals. We cant be entertained to death forever.”

Kovach also says theres plenty of cause for hope that when society is once again looking for more hard news, good journalists will be there to provide it. He points to the results of a poll conducted by Andrew Kohut for the Committee of Concerned Journalists that found that the youngest journalists surveyed were the most concerned about ethics and standards in the profession.

“They are disillusioned by journalism and society and are trying to figure out how they fit at that interface and how to do the job right,” Kovach says. The evidence, he says, is at Websites such as http://www.apbnews.com, where young journalists report on cases of wrongful imprisonment due to malfeasance among police, prosecutors, and the courts. “Its kids who are working in this area who are saying How do I use this power? and thats whats exciting about it,” he says.

Answering a question posed after his Goldsmith Award acceptance speech, Kovach said he also took heart in the outcome of the controversy surrounding the Staples Center in Los Angeles. When reporters working for the Los Angeles Times discovered that the paper had published a magazine section devoted to the sports arena after agreeing to split the profits with the Staples Center, they rebelled. “They went to the city editor, who pushed the issue up the line to the ownership,” Kovach says. “And now the whole process is being reexamined.

“If the public supports that kind of behavior in the newsroom, then things will change,” he says. “They have to.”

As Nieman curator, Kovach is responsible for increasing the foundations reach both within Harvard and around the world. He receives dozens of phone calls and e-mail messages each week  from reporters, former Nieman fellows, and Harvard faculty and staff  asking for help or comment on issues concerning journalism, especially on journalistic ethics. He seized the opportunity provided by the opening up of Eastern Europe to expand the international Nieman fellow enrollment to 12 each year, equal to the number of U.S. journalists who participate. He helped establish journalism centers across Eastern Europe, Asia, Africa, and Latin America, and he has been a strong advocate for the rights of beleaguered journalists in this country and abroad. His is a legacy made all the more potent by his admiration for the institution he represents.

“Its hard to believe that people who have no connection to [Harvard] think of it as a cold, unwelcoming institution,” Kovach says. “This is the warmest place Ive ever lived. The best people really are the best people. And this job has been more rewarding than I ever dreamed possible.”

Nevertheless, he is ready to move on  and to redress one of his (self-defined) “failures” as curator.

“One regret I have is that I did not recognize early enough, nor did I conceptualize clearly enough, a way to take advantage of the convening authority of the Nieman Foundation and Harvard,” Kovach says. “If I had started using [that] authority the first year, to bring the media corporation owners together with the people in the newsroom  just to talk about things, just to discuss mutual needs and concerns, we might have been able to moderate the pressure on journalists to become more info-taining, to fuzz up their standards.”

But for Bill Kovach, there is no time like the present.