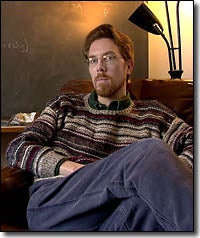 Richard Heck sits in his office, his lanky frame sprawled on a worn armchair. A half-finished bottle of Coke rests on the seat of a wooden chair beside him.

Nothing unusual in this picture, but to Heck, who is a professor of philosophy, the tableau raises enormous problems.

The Coke bottle out there, the idea of the Coke bottle in the mind  what is their relationship? How does one affect the other? As one begins to ponder the problem, a host of inchoate questions and suppositions rush confusingly into consciousness. Heck, an old hand at this business, suggests one approach.

“Studying language is a way of getting at this question,” He says. “At least in language, youve got a sentence: That Coke bottle is half empty. The sentence, as it were, is what does the representing. Its a concrete thing, a starting point. Scientifically speaking, we also know a good deal more about how the mind deals with language than how it deals with concepts or images.”

Heck, who was recently promoted to a tenured position in Harvards Philosophy Department in the Faculty of Arts and Sciences, has won the admiration of colleagues and students alike for his ability to analyze and explain the elusive and often baffling relationships that connect words, things, and ideas.

“Hes very meticulous and extremely well-read in the subject. He knows all the major positions and publications and brings that to bear in his own argumentation,” says Warren Goldfarb, the Walter Beverly Pearson Professor of Modern Mathematics and Mathematical Logic and chairman of the Philosophy Department.

Charles Parsons, the Edgar Pierce Professor of Philosophy, says that Heck “provides a strong presence in the systematic philosophy of language and mind. His secondary interests branch out from that and help to amplify the Departments program.”

A relaxed and unaffected conversationalist, Heck is refreshingly candid about the path of his own career. Asked how he got into the field of philosophy, he replies, “by accident.”

“Somewhere along the line, I decided that however good I seemed to be at mathematics, I wasnt good enough. I was good at solving problems, but I didnt have the creative aspect that really good mathematicians have.”

In the meantime, he had begun to be interested in questions concerning the basis of mathematics. That interest led him to the philosophy department and an honors thesis on the later philosophy of Ludwig Wittgenstein (1889-1951).

“Philosophy is usually something that people stumble into. Rarely do people come to college having had philosophy courses before. What usually happens is that they start asking questions that no one else is interested in until someone suggests, well, maybe you should be studying philosophy.”

A Marshall Scholarship allowed Heck to spend two years at Oxford University where he earned a B.Phil in philosophy and continued his study of Wittgenstein. He also immersed himself in another philosopher whose works would have a seminal influence on his own thinking, Gottlob Frege (1848-1925).

In 1987 Heck enrolled in the doctoral program at the Massachusetts Institute of Technology, earning his Ph.D. in 1991 with a dissertation titled Logic, Semantics, Ontology. He joined the Harvard faculty that same year.

The insights of Frege continue to interest Heck. He has published numerous papers on the thought of the German mathematician and philosopher, and is contemplating writing a book about him. He calls Freges creation of symbolic or formal logic the first really new contribution to the field of logic since Aristotle.

“Its formal in two senses. First, he introduced a system of notation in which inference can be clearly expressed and in which

what is essential to the inference being made can be distinguished from what is not. Its also formal in that its expressed in terms of symbolic relations, that is, something that could be checked by a computer.”

Heck says that Freges system applies most immediately to mathematics, but that it can be applied to any reasoning.

“The problem is that you must know how to apply it, and theres a whole school of thought engaged in the problem of what form of language should be used to express these relations.”

In recent years, Heck has found that his thoughts on logic and language are wending further from the recognized debates that dominate philosophical journals and scholarly conferences. Lately he has been obsessed, he says, with the idea of speaking as rational action, the notion that there is an identifiable kernel of intention in even the most indirect or offhand utterance. Striking out into new territory can be exhilarating, but it can also be intimidating.

“Over the last couple of years Ive been letting these ideas turn over in my mind. Its a kind of mysterious process. I dont understand it very well. There doesnt seem to be much that I can do to make good ideas show up. They just seem to come out of nowhere.”

Occasionally, voyaging on what Wordsworth called “strange seas of thought” can lead to moments when one questions the value of the philosophic enterprise itself. Yet, for a philosopher, trained to navigate amidst the foggy seascape of imponderable questions and eternal unknowns, such doubts may not be as crushing as they might appear.

“Sometimes I wonder what sort of value this whole endeavor has. I suppose there is a tradition stretching from Aristotle and beyond of which I am a part. But what is the point of it all? I dont know if I can answer that question. Most of the time I just dont worry about it. But then, the question, Why is philosophy worth doing? is itself a philosophical question.”