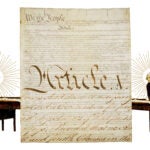 Scholars involved in Legacy of Slavery Initiative discuss findings, remind that each of enslaved was ‘real person …with dreams, with pain’

Harvard’s connections to slavery run wide and deep. Tracing those ties required close scrutiny of the evolution of a major American institution from its earliest years, according to scholars involved in the Harvard and the Legacy of Slavery Initiative who spoke at a Faculty of Arts and Sciences event on Monday.

The investigation involved facts and figures, documents and dates, but members of the initiative committee said that at its beating heart was a group of ordinary people, some of whose names were recovered, and others whose names may never be known.

The names “are so poignant because they help us to recognize that each person who was sold, rented, owned in the period when Harvard was involved in enslavement was actually a real person with a name, with a family, with loved ones, with aspirations, with dreams, [and] with pain,” said committee member Tiya Miles, Michael Garvey Professor of History and Radcliffe Alumnae Professor. “The lack of names says as much as the presence of names in those documents because it tells us that people existed, that they were there, but also that the historical record has not made note of them. We contend with the difficulty, the challenge, the sadness of archival silences across the study of enslavement in the United States and around the world.”

Miles, who is also director of the Charles Warren Center for Studies in American History, and other faculty members involved in the initiative reflected on key aspects of the report their committee released in April. The discussion took place at a virtual community event, “Harvard’s Motto, Veritas, Demands of Us Truth,” co-sponsored by the FAS Office for Diversity, Inclusion, and Belonging and the Harvard Radcliffe Institute.

“Their work has revealed some painful truths for our community to contend with and I’m grateful to each of them for their uncompromising commitment to tell the full story of Harvard,” said Claudine Gay, Edgerley Family Dean of the Faculty of Arts and Sciences, in her opening remarks. “And to use that story as a catalyst for repair because our history is not the last word on Harvard University.”

Veritas was at the center of the conversation, which was moderated by Harvard Radcliffe Institute Dean Tomiko Brown-Nagin, chair of the Presidential Committee on Harvard and the Legacy of Slavery. Faculty members explained what prompted the creation of the project and the hard truths revealed by the report.

“The implication of our model, through Veritas, is that the truth is demanded of us,” said Vincent Brown, Charles Warren Professor of American History and Professor of African and African American Studies, who created a short film to introduce viewers to the report. “It’s a significant departure for this institution, and for many others, to reckon with the darker aspects of its past, to really think about history in this way, as something we have to be accountable to, and take responsibility for. For that, I’m extremely grateful to the University for launching this initiative.”

Sven Beckert, Laird Bell Professor of History and a member of the committee, was first inspired to dive into the historical relationship between Harvard and the institution of slavery in 2007 after reading a report about Brown University’s own connections to slavery. That year, Beckert taught a seminar attended by four undergraduate students who researched past Harvard presidents who had enslaved Black and Indigenous people to work at the University and invested in activities related to slavery.

In 2011, then-President Drew Faust released a report jointly written by faculty and students on Harvard and slavery. Students continued their research on Harvard’s links to slavery outside of the classroom, “so it became a really kind of bottom-up engagement,” Beckert said.

The nearly 90-minute discussion touched on several components of the report, including the University’s strong connections to the Caribbean, the people enslaved at Harvard, and the University’s previous dealings with race science. The panel put particular focus on the ties Harvard Law School and Harvard Medical School had with enslavers and those they enslaved.

HLS traces its beginnings to Isaac Royall, a plantation owner on the island of Antigua who funded Harvard’s first professorship in law, explained Annette Gordon-Reed, the Carl M. Loeb University Professor and a member of the committee.

Research found that individuals at the Medical School experimented on Black and Indigenous bodies during race science research. The discipline was created in the 1700s and 1800s by scientists and physicians in Europe and the Americas who believed that humankind was divided into separate and unequal groups, said Evelynn Hammonds, Barbara Gutmann Rosenkrantz Professor of the History of Science, professor of African and African American studies, and professor of social and behavioral sciences at the T.H. Chan School of Public Health.

“I would argue that part of the reason this history is so painful is because of the deep resonances to what we still engage in today,” Hammonds said. She noted that medical and scientific studies today continue to highlight the differences between people of different races and their links to certain diseases or medical issues.

Throughout Monday’s panel, faculty emphasized that a major focus of the University’s probe into its ties to slavery involved gathering information about those who had been enslaved by Harvard presidents and other leaders, faculty, and staff. The committee found that those individuals were responsible for enslaving more than 70 people.

The Legacy of Slavery Initiative is only in its beginning phase of work. In October, the Recommendation Implementation Committee announced that attorney, executive, and scholar of institutional accountability and the legacy of slavery Richard Cellini was appointed to lead the Legacy of Slavery Remembrance Program.