How to save democracy 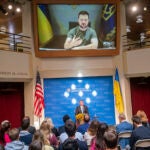 Events examine what can be done to address grinding problem of race, internet’s power to exploit political, cultural schisms to destructive ends

Donald Trump was the perfect “meme leader,” appealing to an array of shadowy, loosely organized groups with varied philosophies but shared roots in internet “imageboards” like 4chan and 8chan, along with a desire, like their adopted chief, to disrupt the established power structure.

“He had already — before he ran in 2015 — become a memetic figure in a lot of these communities. His hair was already a meme. He stood for a certain kind of New York wealth and power and masculinity to these communities,” said Emily Dreyfuss, a journalist, fellow at the Shorenstein Center for Media, Politics, and Public Policy, and co-author of “Meme Wars: The Untold Story of the Online Battles Upending Democracy in America.” “Then, when he decided to run for president, these characters were like, ‘Oh, he’s one of us.’”

Dreyfuss appeared at Harvard Kennedy School event on Monday with co-authors Joan Donovan, research director of the Shorenstein Center, and Brian Friedberg, Shorenstein Center senior researcher, as well as Harvard Anthropology Professor Gabriella Coleman. The four spoke at “How the Internet Changed Politics: From Memes to the Insurrection,” an event sponsored by the Institute of Politics, one of three John F. Kennedy Jr. Forums at the Kennedy School this week that touched on the theme of current threats to democracy.

The group characterized Trump’s ascension as something of a perfect storm that upended the U.S. political system that took full advantage of the internet’s evolution from early tool that promoted hope to “trickster,” as Donovan described it. While the web has become a valuable and indispensable part of our daily lives, it is also a place where racists flourish, conspiracists plot, memes arise, and where ordinary users must be on alert for scams, misinformation, and outright lies.

The ground had been prepared on social media boards like 4chan and 8chan, where people sharing unpopular views anonymously were able to loosely organize into groups like the Anonymous’ “hacktivists,” Q-Anon’s conspiracy theorists, and the Proud Boys and Oath Keepers’ right-wing militias. Trump and Republican operators like Roger Stone and Stephen Bannon understood how to mobilize those organizations’ grassroots reach and fervor behind Trump’s mission.

The roots of mobilization efforts such as #StoptheSteal can be traced in part, oddly enough, to the rise in 2011 of the more progressive, equality movement Occupy, according to Donovan and Friedberg. Though right-wing activists disagreed with the movement’s politics, they appreciated the way Occupy made use of snappy memes, distributed over the internet and social media, as well as traditional media, to mobilize people into action.

Today, it is Democrats who are struggling to mimic Republican success, in President Biden’s “Dark Brandon” meme and the U.S. Senate campaign of Pennsylvania Democrat John Fetterman, who has deployed memes against Republican Mehmet Oz for, among other things, his rival’s longtime residency in and identification with neighboring New Jersey.

Donovan said it’s important for society to grapple with how much “incitement” — like that which led to the Jan. 6 riot — we should allow, how we ensure that all parts of society have access to these technologies, and whether platforms like Facebook should be, effectively, the ones charged with policing national information security.

“Facebook is the first line of defense against attacks against our nation on Facebook. Do we accept that as part of our political anatomy now?” Donovan said. “I have nothing but existential dread for the future of an internet that is not owned by the people.”

The internet has become a powerful tool to exploit various schisms in American culture and politics to various ends. One of the deepest and perhaps the most longstanding involves race.

Right now, said Steven Levitsky, David Rockefeller Professor of Latin American Studies and Professor of Government, much of the rising anger among whites amounts to a backlash in response to the growing power and influence of communities of color.

Levitsky made the observation during a discussion on the fragility of global democracy at a Wednesday evening at the Kennedy School. Joining Levitsky were Daniel Ziblatt, Eaton Professor of Government, and LaTosha Brown, Senior Practice Fellow in American Democracy at the Ash Center and co-founder of Black Voters Matter Fund.

As the U.S. has moved ever closer to a non-white majority, Levitsky said it’s “not an accident” that norms that were once strong when white Christians dominated the system began to fray in the mid-1960s just as sweeping Civil Rights laws moved the country closer to a true multiracial democracy.

Ever since, the panelists said, fear of losing power has led to attacks on democratic institutions and a weakening of democratic norms around the world, but particularly in the U.S. over the last five years.

We’re now at a point where Republicans and Democrats agree that American democracy is in danger — because of the other party, which makes finding common ground almost impossible, Ziblatt said.

“People tend to think that a democracy is working when the things that they like are getting passed,” said Ziblatt, who co-wrote the 2018 bestseller, “How Democracies Die,” with Levitsky. “That’s why it’s so critical to have these shared, basic norms.”

With some still questioning the legitimacy of Black voters, Brown wondered what specific steps the country needs to take to becomes a true democracy.

“Democratize the democracy,” said Ziblatt. There are lots of ideas on how to do that, from reforming or eliminating the Electoral College, to making it easier to vote, to expanding Congress. These reforms will all be difficult to achieve, but are “absolutely necessary,” he said. The good news is that most people are in favor of making the country more democratic, not less, he said. “I think majorities of Americans believe in democracy, so we need to have our institutions reflect that.”

The short-term outlook is not good, they said. Over the next decade, the country is headed for “intense conflict” as American democracy slides “in and out of crisis. MAGA forces are not going away,” said Levitsky.

But the American experiment will survive, and there are reasons to feel optimistic. Asked what gives them hope for the future, Ziblatt said it’s that most Americans still believe in democracy and remain open to other viewpoints. “It’s our institutions that are the problem.”

For Levitsky, it’s Generation Z and Millennials, who “are much more tolerant, much more open to diversity and multiracialism than any generation that ever preceded them. And I think they’re the ones that are going to get us there.”

Maya Wiley agrees that diversity is more than a goal. It is at the very heart of democracy and that student activism may be the key.

“Through democracy, everyone is meant to have a say,” said Wiley, president of The Leadership Conference on Civil and Human Rights —the nation’s oldest and largest civil rights coalition — in a Kennedy School event Thursday. No matter what they look like, where they came from, or what their heritage is — they get a voice. “The fundamental problem democracy is trying to solve is how to be a pluralist society.”

Wiley spoke with Professor Khalil Gibran Muhammad, director of the Institutional Antiracism and Accountability Project (IARA), in a discussion, “The Crisis of Racial Justice in a Faltering Democracy,” part of a joint series hosted by IARA and the Institute of Politics titled “Looking Back, Paying it Forward.”

Despite American democracy’s seeming promise of universal enfranchisement, at its core remains the fundamental contradiction between the lofty rhetoric of rights and the continued prevalence of racial injustice. “Can you understand the existential threat to American democracy, liberal democracy in many parts of the world right now, without understanding the role of race or racism or colonialism?” asked Muhammad.

“The truth of this country is this [the failure to achieve a multiracial democracy] has been the fundamental struggle from the inception,” Wiley said.

Nor can the racially charged rhetoric of the Trump years be seen as a mere aberration. “This is not a blip on the radar. This is not Trump was in office… What we’re facing in terms of the absolute and apologetic attack on democracy and pluralism, and on inclusion and on justice, and on fundamental rights is something that’s been constructed over the past 20 some years.”

Though Wiley conceded that the constant assaults on democracy and racial justice — especially as the world reels from a devastating pandemic — can be overwhelming, she noted that organizers were hard at work on the ground across the country. Many of these unsung coalitions and campaigns have been quietly pressing ahead on issues core to a functioning multiracial democracy such as voting rights.

In fact she advised the students in the room to pick an issue, focus on it, and distill it into a simple message that is a call to action. “The ability… to get attention is very strong and powerful. And I think that’s true for all of us.”