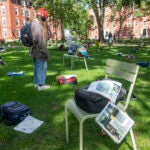 Starting a conversation on college suicide

Students raise more than $32,000 in flood relief — and awareness on campus

About 30 undergraduate and graduate students hastily gathered in the Leverett Junior Common Room a month ago when catastrophic monsoon flooding hit Pakistan. Many were from the Harvard College Pakistani Students Association. Some were from the region; others had family there. Of course, the students decided, they would raise funds, but they also wanted to raise real awareness.

“The idea was basically to make sure that this wasn’t one of those typical social media fundraisers where people donate on Instagram and they’re done thinking about it,” said Asmer Safi ’24, who is from Pakistan’s second largest city, Lahore. “A big part of it was also to develop a sense of urgency on campus. … We really chose to be in people’s faces about it and be more specific in the way that we target our audience.”

So far, the strategy has proven effective. To date, they have raised more than $32,000 in aid that has gone to five Pakistani NGOs that provide victims with meals, shelter, sanitary products, and more. In addition, the effort has helped galvanize other South Asian organizations at Harvard and at other schools to mobilize and provide aid.

Their assistance is much needed. The disaster, which experts say is likely a result of climate change, has left about a third of Pakistan underwater. The death toll has risen to more than 1,600, and millions more have been displaced. Damage estimates have been put at $30 billion as violent swells swept away roads, homes, schools, and hospitals across the region.

“We’ve had instances of big floods, but never as big as this,” said Safi. “Some of my friends, their entire villages have been completely submerged in water.”

“What is happening in Pakistan right now is a call for all of us to put our humanity into action,” said Iqra Noor ’23, who lived in Pakistan for 10 years and is an adviser to the HCPSA’s board. “The past couple of weeks of this campaign have shown us that we have the privilege and platform to at least raise awareness and funds, and there is power within each of us to make an impact.”

The HCPSA, which was created in 2011, has focused its efforts on campus spaces that serve as gathering places. Group members have visited all the undergraduate dining halls with a 12-foot-long banner, proclaiming that a third of the country has been flooded. The bold display gets immediate attention. Then, a student makes a speech on the devastation and solicits donations via a flier with a QR code. The group says many students approach them and admit they were completely unaware of the situation.

“[The flooding] is not getting a lot of coverage in Western media to begin with, so not a lot of people know about it,” Safi said. “Then with the queen’s death and a lot of stuff happening simultaneously, all this information gets drowned out.”

The past few weeks, students have sometimes been able to collect $1,500 to $2,000 during dining hall visits, which they used to do three times a week.

The club has also targeted planned campus events for similar visits and pleas for donations, often collaborating with organizers. “We created this entire database of every event that was happening on campus and have sent representatives to many or asked people to make the announcement on our behalf,” Safi said.

For example, when Pakistani singer and Harvard alumnus Ali Sethi visited Sanders Theatre for a concert in mid-September, the group coordinated with Harvard’s Lakshmi Mittal and Family South Asia Institute to include a plug for the fundraiser.

“It’s been heart-wrenching to watch the unfolding disaster in Pakistan, but it’s also been reassuring to watch the Harvard community, especially student groups from across South Asia, come together in solidarity and support for the country’s efforts to recover and rebuild,” said Tarun Khanna, director at the institute and the Jorge Paulo Lemann Professor at Harvard Business School. “Kudos to them for speedily taking a lead on this.”

About 33 million have been hit by the flooding. The National Disaster Management Agency believes that more than half a million homes have been destroyed and the IRC, a prominent international aid group, raised fears of a pending food shortage in Pakistan because of a severe loss of crops.

The disaster has sparked classroom discussions on the impacts of climate change. Harvard Professor Daniel Schrag, in his General Education course “Confronting Climate Change: A Foundation in Science, Technology, and Policy,” invited Hamza Haroon, M.P.A. ’22, a former a special adviser to the Ministry of Science and Technology and a climate advocate, to report to the class from Pakistan as someone on the front lines of the catastrophe.

Along with the South Asia Institute, other organizations have joined in the HCPSA’s fundraising cause, including Harvard Ghungroo, Harvard College Palestine Solidarity Committee, the Harvard Pakistan Caucus, and the South Asia Caucus at Harvard Kennedy School. Nearly 60 groups across campus have allowed the HCPSA to post flyers for donations at extracurricular fairs and make announcements at events or sessions.

Pakistani groups at other universities have also approached the HCPSA about how they can mobilize similar efforts.

“It’s really helped in understanding that we can really reshape narratives and create a sense of urgency on issues, even if it’s starting off with only 30, 35 students,” Safi said. “We can all really, really, really make a difference.”

If your organization is interested in joining the efforts, please email hcpsa00@gmail.com. To donate visit: https://linktr.ee/hcpsafloodrelief.