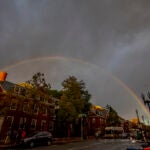 Eight cadets and midshipmen in training were honored for their commitment to serving the country and sworn into the armed forces as full-fledged officers by the Chairman of the Joint Chiefs, Gen. Mark Milley, during the Reserve Officers’ Training Corps commissioning ceremony Wednesday morning in Tercentenary Theatre.

Milley thanked the students for stepping up at such a critical juncture in modern global history. He spoke urgently of dangers that threaten the world order and key Western institutions, such as the United Nations and NATO. Russia’s invasion of Ukraine, along with moves by China to assert dominance in the Western Pacific, North Korea’s ongoing missile tests, and rogue terrorist groups, all present imminent and potential dangers to democracies around the world, he said.

“Over the next 10, 15, 20 years of your life, you’re going to be dealing with these incredibly challenging, very, very difficult geostrategic issues that are out there,” Milley said.

Adding to the complicated mix is the uncertainty over new technologies and how they will be used, the changing nature of warfare as new tactics and tools emerge, and new arenas, as space and cyber and information become even more important new battlefronts, he said.

Appointed Chairman of the Joint Chiefs by President Donald Trump in 2018, Milley broke from Trump on a number of issues, including resisting calls by the White House to use active-duty troops to quell protests around the nation sparked by the police murder of George Floyd. Milley remains in his post under President Biden.

“We are all created free and equal, and you’re gonna rise or you’re gonna fall based on your knowledge and skills, your attributes, perseverance, your hard work, and you’re going to be judged by the content of the character, not the color of your skin,” he told students.

“That’s what the Declaration of Independence is all about: We hold these truths to be self-evident that all men, all women, are created equal and everyone has a right to life, liberty, and the pursuit of happiness.

“That is the oath that you are about to take and under no circumstances, no matter what it costs you, whether the cost of your arm, your eyesight, your life, your limb, your reputation, it doesn’t matter. You will never, ever, turn your back on the U.S. Constitution, and it is our solemn duty, even at the risk of our own death, to pass that Constitution off to the next generation whole, so that they too can live in liberty and freedom.”

Harvard President Larry Bacow spoke of the University’s long and deep connections to the U.S. armed forces, dating back to George Washington’s decision to commandeer Harvard’s oldest building, Massachusetts Hall, and Harvard Yard for his Continental Army troops during the Revolutionary War. Bacow praised the military’s contributions to the support and defense of the Constitution.

The ROTC members “stand apart” from other students for their courage, selflessness, and their devotion to the ideals on which the country was founded, and serve to demonstrate “the unique contribution that students educated at Harvard can and should make to the armed forces,” Bacow said.

“For an institution that prides itself on educating for public service, there is no greater form of public service than to serve one’s country in uniform,” he said. “And you continue that tradition.”

Bacow presented each student with a copy of “To Risk It All: Nine Conflicts and The Crucible of Decision” by retired Adm. James Stavridis, former Supreme Allied Commander in the Navy.

David Chung ’22, an economics concentrator, will serve aboard the USS John P. Murtha in San Diego as an active-duty surface warfare officer in the Navy.

Danielle Levin, who graduates with a dual master’s degree from Harvard Kennedy School and MIT, is joining the New York Army National Guard as a military intelligence officer, specializing in cyber.

Christina Lowell ’22, an applied math concentrator, will join the Air Force as an aviation officer, reporting to the 14th Flying Training Wing in Columbus, Mississippi.

Michael Pumiglia ’22, a government concentrator who was active with the Harvard Square Homeless Shelter, will serve as a military intelligence officer in the Army Reserve at Fort Belvoir, Virginia.