Laurie Anderson is, as always, undaunted 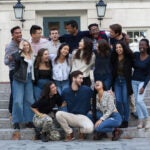 Avant-garde performer and recipient of this year’s Charles Eliot Norton Professorship in Poetry Laurie Anderson was undaunted by the task of designing her six Norton Lectures for a virtual audience.

Anderson, who has produced film, music, multimedia, virtual reality installations, and photography, has utilized technology in her work for decades. Her first album, “Big Science,” included the surprise 1981 hit single, “O Superman,” which used distortion and vocal manipulation in ways that had not been heard before in pop music. Her recent work includes “Heart of a Dog,” a 2015 documentary film and soundtrack about the life of her beloved pet, Lolabelle, and a trilogy of virtual reality experiences developed with Taiwanese artist Hsin-Chien Huang that concluded with “To the Moon” in 2018. The Hirshhorn Museum and Sculpture Garden in Washington, D.C., is planning an exhibition of her old and new work in sound, video, and painting.

The first Norton lecture, “The River,” will be given Wednesday and kicks off the yearlong series “Spending the War Without You: Virtual Backgrounds,” which will continue into the fall semester. The first three lectures will take place in spring over Zoom and are hosted by the Mahindra Humanities Center. Anderson spoke to the Gazette about her creative process, collaborating with other performers, and the transformation of New York City during the pandemic.

GAZETTE: Can you tell us a bit about your plans for the Norton Lectures?

ANDERSON: The first one will be based on ideas about listening and also about what it’s like to live by the Hudson River. The river has really influenced me in ways that I didn’t understand [before]. I wanted to move to New York as a child to be near water. Coming from a landlocked part of the country [near Chicago], it was big draw for me to be in a port city. I had a book about the New York harbor, and it looked so lovely and amazing, and I wanted to go there. So [the lecture] is looking back at being here for so many years. I did look back a little bit [at my work] and one of the things that I noticed was that I was always starting each performance with something about living by the Hudson River. So the first lecture will be able how that’s affected how I think about music and how I make music.

It wasn’t going to be this way originally, but now I’m going to try to run the lectures a little bit like a show, so that I can access visuals and electronic filters and manipulate voices. There are some things that I’m going to try out [during the lectures] that I would not be able to do in a live situation, ever.

GAZETTE: What has it been like to be in New York during this time?

ANDERSON: It is such a difficult and tragic time for so many people, and I know it’s been disastrous for many businesses. But I wasn’t loving what was going on pre-pandemic in New York. It had become a big tourist town, and culture was aimed at tourists. I felt like I was getting caught in a big machine. It had become, as many people say, not the art world but the art market at every level. With the tourists gone, I think every city is experiencing the pleasure of seeing who actually lives there. So I feel kind of happy about that.

“I’m going to try to set up [the Norton lectures] so that there are a few faces that I can see in in the Zoom world, because I find that valuable rather than just talking to the screen.”

GAZETTE: What do you think New York will be like for artists after the pandemic ends?

ANDERSON: My fear is that the large institutions will survive, but the things that really make New York happen on a basic level maybe won’t. I’m talking about smaller clubs and venues, and smaller art centers that are really struggling now, where young artists get to try stuff out. Those are beyond crucial to an art city like New York. You [need] to have a lot of places where you’re not going to be presenting your big masterpiece, [but where] you can work with other artists and musicians in your audience. Those are really important places that are getting hit very hard. I don’t mean to be some old fart going on about the old days, but they were pretty great. I love seeing the things that remind me of that kind of freedom, and artists don’t have that right now. That part is tough.

GAZETTE: Your work has always incorporated technology. Do you feel differently about using technology when we’re all forced to do everything online?

ANDERSON: I’m just a geek, so I enjoy playing around [online]. I don’t feel that [the pandemic] makes [those] things more difficult or easier. It’s better than nothing, but then I think there is, for me, just nothing like live music and being with people in the same room. I always use a lot of technology in shows and even in lectures. I’m going to try to set up [the Norton lectures] so that there are a few faces that I can see in in the Zoom world, because I find that valuable rather than just talking to the screen.

GAZETTE: What is your research and planning process like for a new work?

ANDERSON: I start with a blackboard, and I fill it with images, thoughts, ideas. I sometimes see pictures — sometimes just a phrase — and see if any of them are connected, and [ask]: Is there any kind of theme in these really disparate things that I find interesting? What’s the engine that could push them? So it starts out as very free-form.

GAZETTE: You’ve done a lot of collaboration in recent years. What do you like about working with other people and what does the process teach you about your own work?

ANDERSON: I’m pretty much a loner, so it’s a big stretch for me to call someone and say, “Would you consider doing this?” The times that I’ve been able to bring myself to do that, I’ve learned so much. In the pre-pandemic year, I was much more involved in improv. I was at a festival in New Zealand in March, and [musician and composer] John Zorn was the first person who asked me to an improv show. At that time, I was doing things that were very, very set. Every single sentence was set; every image was set. I really had to force myself to try [improv], and it’s my favorite way of making music now.

Over the last year I’ve been doing a music trio with [jazz bassist] Christian McBride and [cellist] Rubin Kodheli. I realized that I missed it so much, this free-form thing that’s not really happening now. Yesterday we recorded something, with our masks on and everything. It was hard, but the second we started to play … it was just what I live for, to make something out of nothing. It always reminds me of building a big ship that you’re constructing together. It’s a big thrill.