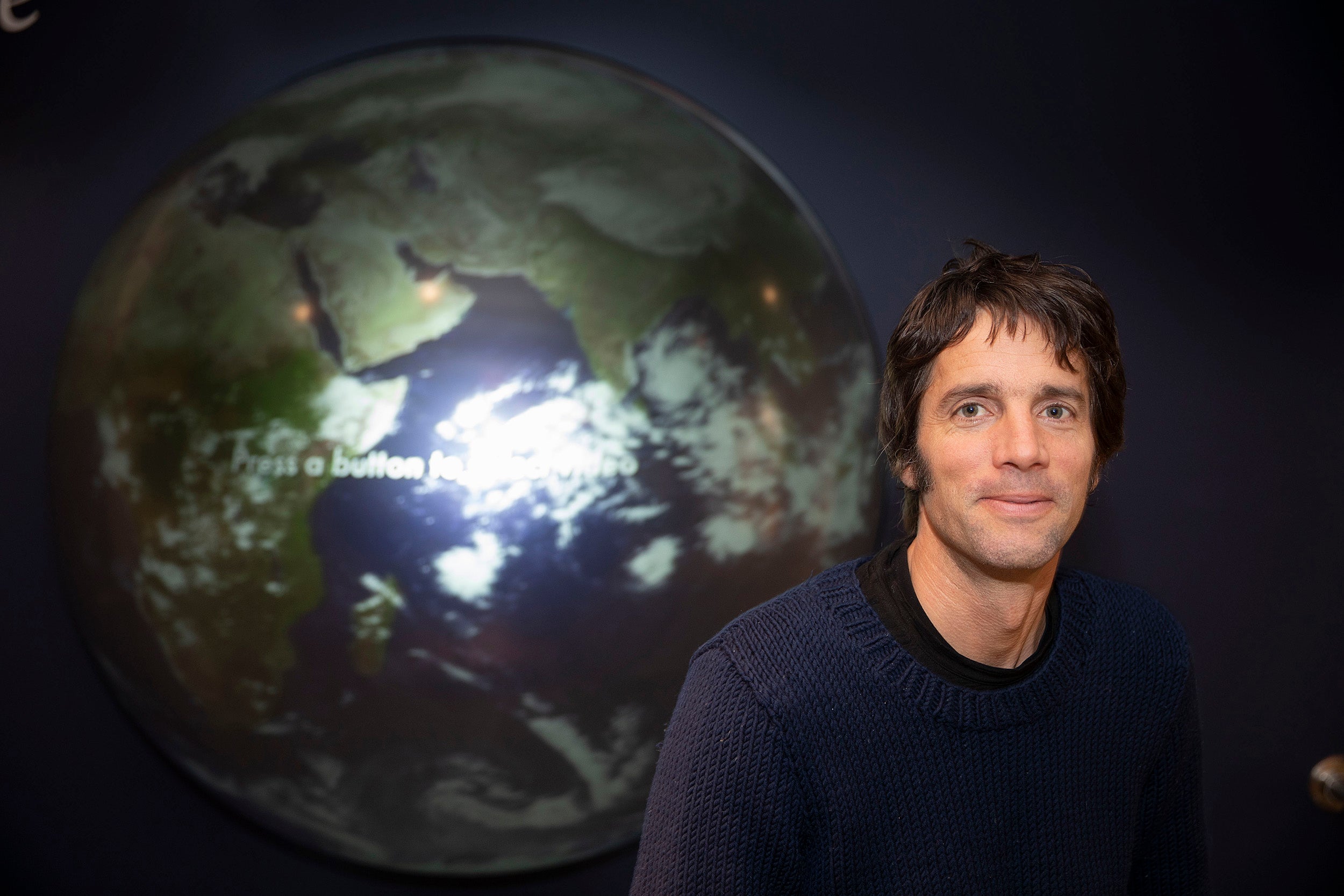 What does it mean to be American?

Jessica Lander posed the question to the students at majority minority Lowell High School taking her seminar on American diversity last year. The answer, she warned, has been debated from the nation’s beginning and will likely persist as long as it remains.

Undaunted, students in the fall and spring semesters grappled with it and studied the history of equity in the U.S. before devising responses — 55 personal narratives collected in two volumes titled “We Are America” and “We Are America Too.”

Lander  Ed.M ’15 and her students — many of whom have graduated and are now in college — are now using the books to jump into the national conversation on American identity.

During the 2019-20 school year, Lander and 18 of her students are working with 36 teachers in 23 states to help more than 1,300 students weigh in on the topic with their own stories. These will likewise be published in books at the end of the school year (one for each school participating) and posted in audio form on the We Are America Project website.

The goal is to promote conversations about identity and belonging among some of the nation’s newest citizens, at a time when many of their issues sit squarely atop major fault lines in the deep riven nation. Lander and her students hope the stories will also build empathy among readers who encounter them.

“This is an essential conversation we need to have,” said Lander, who along with being a social studies and civics teacher at Lowell High is also a published author currently on sabbatical to work on her third nonfiction book. “Being American looks very different than it did 100 years ago and very different from what it looked 100 years before that.” Because of that fluidity, “it’s something every generation gets to redefine and who better to redefine it for this generation than the young people who are the future of America?”

It’s why Lander said she assigned the original project in the first place. She wanted her students to study their own personal histories and put them in context with what they were learning in the course analyzing key laws on equity, studying landmark Supreme Court cases, and looking at social rights movements throughout U.S. history, along with the advocates who led them.

Some of her students’ stories were about a single moment, such as dealing with racism for the first time or a conversation with a sibling that deeply affected them. Other stories spanned a young life, such as Diane Chikulu’s story of being born in a Zambian refugee camp — where she lived until she was 17 — and coming to the U.S., receiving her green card in 2017, and finally gaining a sense of belonging.

There’s also Philly Marte’s story titled, “We Still Have Work to Do,” in which he recalled a childhood spent in a racially and culturally mixed neighborhood juxtaposed with lessons in school about the history of bigotry and discrimination in the U.S.

“While I was growing up, my dad owned a bodega in downtown Manhattan,” Marte wrote in his essay. “People who came in were from all corners of the world …. Everyone always seemed united at our store, everyone chatting with one another, no noticeable differences, no judgment as far as we could tell.” It was the same story as he moved from place to place and interacted with neighborhood kids in each location.

In Philadelphia, “my older brother was the social bug of the streets, so I followed him around meeting his friends who were all races, Caucasian, Asian, African, and of course us, Hispanic,” wrote Marte, one of 12 student founders of the national We Are America Project. “We didn’t notice or care about these differences.”

“Growing up I thought the whole world was like this, full of people of different colors who supported and cared for one another,” Marte wrote. “Growing up with such diversity in my life, I realized I had grown blind to racism, sexism, and other kinds of exclusion. Blind to all the negative parts of our history.”

Marte hopes that students who do the project this year examine  many of the same issues his class did and gain new perspectives about themselves and their families.

In his class, for example, Safiya Al Samarrai learned and wrote about why she and her family left Iraq in 2013 — a story that had been partly shielded from her.

“I never until last year [as part of the project] asked why we left or what was going on,” she said. Her parents told her of the growing threats her family faced because her brother was an Iraqi soldier who’d been trained by American special forces — and had, in fact, been the target of a car bomb. After leaving Iraq with her parents and five siblings and spending two years in Turkey, Al Samarrai came to the U.S. in 2015.

“At that moment when I was sitting with my parents, they started telling stories that I had never heard of.” At the end of it, “I realized where I came from, who I am, what my parents have sacrificed for us, for their kids,” said Al Samarrai, who’s now a freshman at Middlesex Community College.

“While I was growing up, my dad owned a bodega in downtown Manhattan. People who came in were from all corners of the world …. Everyone always seemed united at our store, everyone chatting with one another, no noticeable differences, no judgment as far as we could tell.”
— Philly Marte, “We Still Have Work to Do”

The essay collections have been well received. Lander’s students were recognized with an excellence award by the city’s school committee and shared their experiences on local radio, at HubWeek, the Boston Book Festival, and at local universities, including twice at Harvard where materials from the book are currently being displayed on the walls of the Gutman Library.

For the national project, Lander and her students have partnered with three national nonprofits: Facing History and Ourselves, Reimagining Migration, and New York’s Tenement Museum.

The We Are America Project launched in July and was driven by the student founders who on the last day of school last year came to Lander and said they wanted to keep the work going after seeing their initial success and seeing potential for a larger impact. On a whiteboard, they began mapping out what a national version would look like, eventually turning to ideas for funding, curriculum, and applications for teachers. After selecting the participants they’ve keeping in close contact with them to answer questions and help keep everything on track,

“These are young people leading this work,” Lander stressed. Even her seminar, she said, was originally co-started three years ago with a student and much of it has remained student led. On Thursdays, for instance, students would form Socratic circles and discuss the lessons from the previous days. On Fridays, Lander would step back, and her students would teach the class for the day.

The student-editors receive small stipends, but the real reason they do it is because of a deep belief in the work.

Through the project, “I realized sometimes the stuff that you avoid or you try to run away from and you don’t want to accept is the stuff that makes you you,” said Lindsay Philippe, who wrote about growing to love her dark skin color and is now also a freshman at Middlesex Community College. “The project is basically to give other people the chance to tell their stories and feel the same way that I felt.”

“We Are America: Expanding Understandings of What it Means to be American” features the 55 personal narratives from “We Are America” and “We Are America Too” alongside black and white portraits of the students. The materials are on display Gutman Library until Dec. 16. 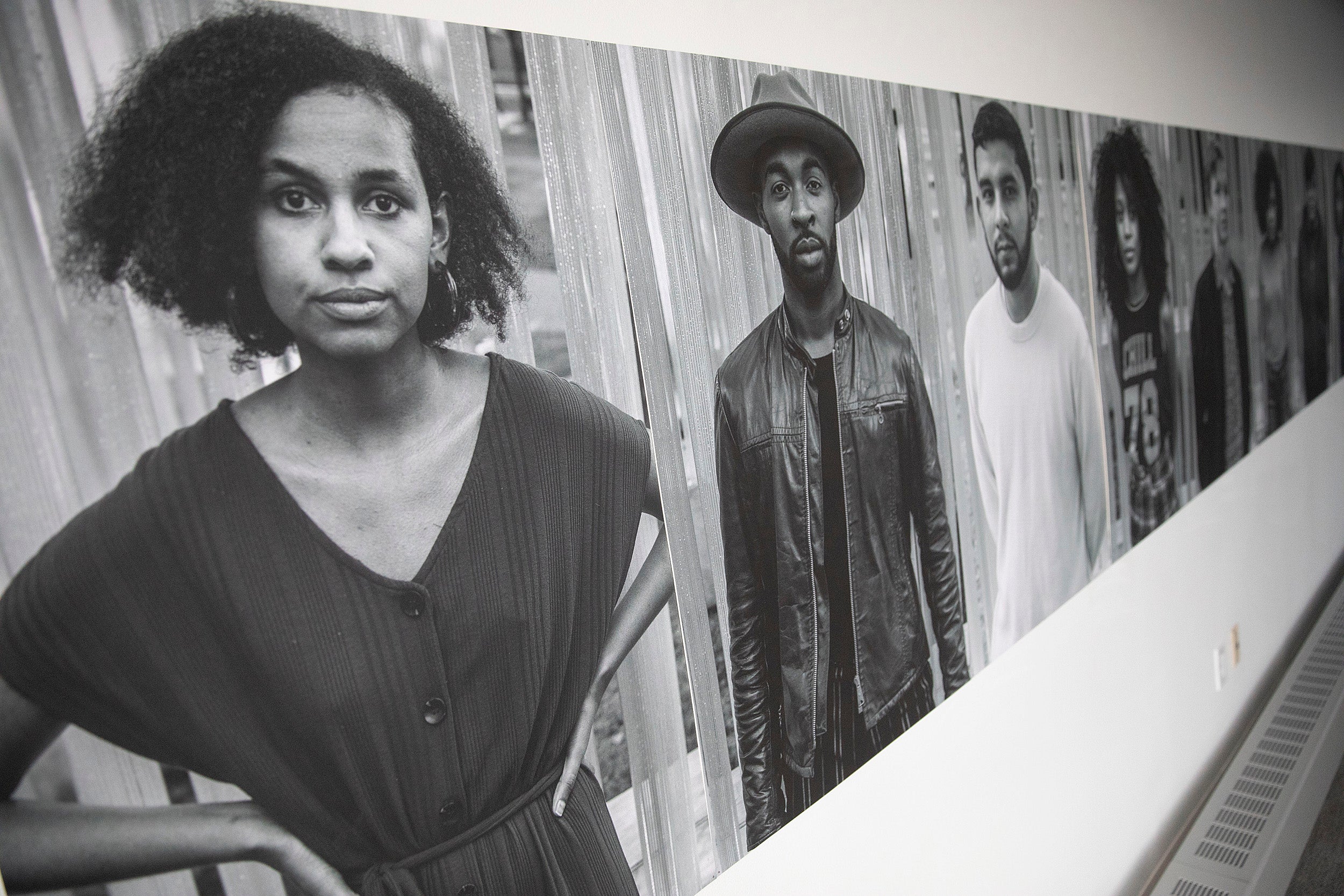 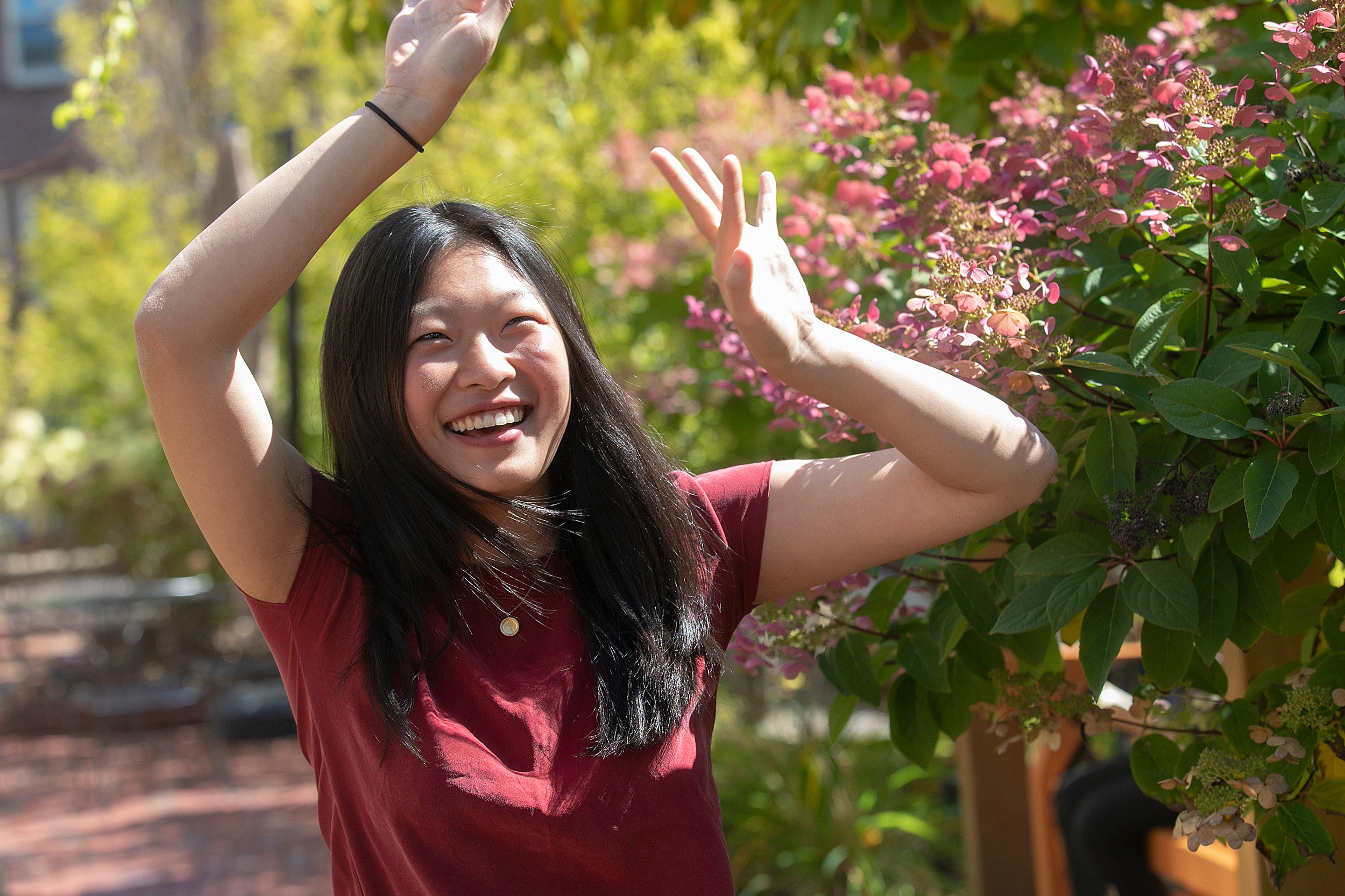