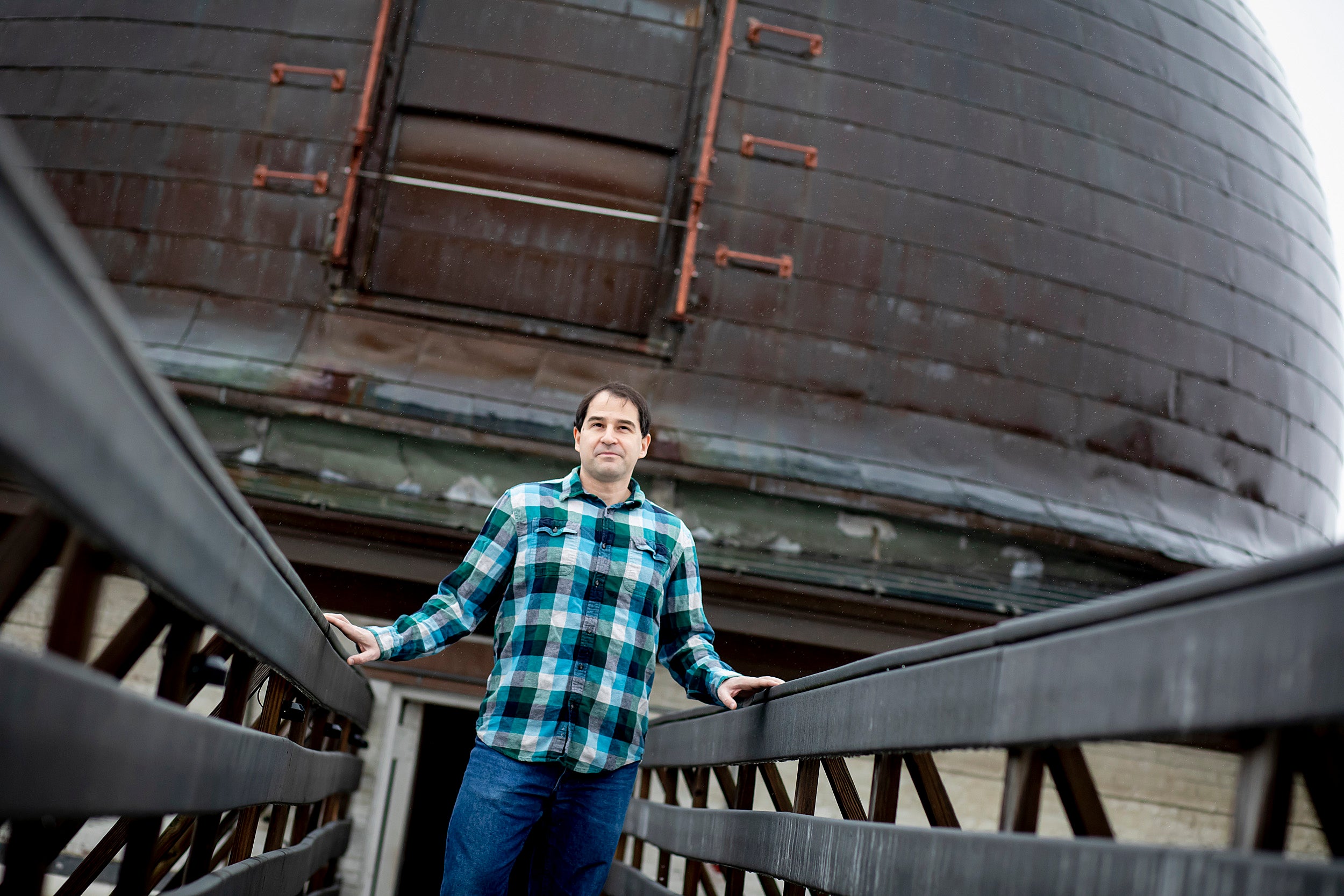 What makes their colors pop — almost glow — is the contrast with the tiny spider’s super-black velvet patches, according to a recent paper in the Proceedings of the Royal Society B by Dakota McCoy, a Ph.D. student in the Graduate School of Arts and Sciences and a researcher in the lab of George Putnam Professor of Biology David A. Haig. McCoy’s research is the first to suggest that the highly absorbent, anti-reflective black surface is characterized by an array of bumps known as “microlenses,” reminiscent of those found in man-made anti-reflective materials.

“The microlens arrays on the spiders, which have evolved in a peculiar shape optimized for anti-reflection, are very similar to man-made surfaces. Perhaps their particular size and shape could help us design better solar-capture devices,” she said.

The research follows on McCoy’s 2018 discovery that the same muted deep black — which reflects only half a percentage point of light — makes nearby colors on the feathers of the male birds of paradise seem ultra-bright.

McCoy hopes understanding the light-absorbing abilities of these flashy spiders will lead to new applications. Engineered microlenses could eventually, for example, help prevent glare on eyeglasses or enhance the absorbency and efficiency of solar energy cells. McCoy, who is now looking to team up with an engineer to create a prototype, envisions a polymer microlens film that could be laid over lenses or solar cells.

“Objects that are glossy give off little white gleams of light that give us a lot of information. Our theory is that the ultra-black makes it much harder for us to understand how much light is hitting the spider, so the colors on the males appear bright deep in the shadow of the black,” said McCoy. The most commonly studied form of natural microlenses exists in the green leaves that capture light during photosynthesis.

“Now we have also have evidence of a very fundamental visual illusion that evolved in invertebrates — that spiders also use white highlights to calibrate their color vision,” said Victoria McCoy, a paleontologist studying soft tissue and biomolecule preservation at the University of Bonn in Germany and Dakota McCoy’s sister.

The research was the sisters’ first collaboration, at least in the lab. The pair recalled nature walks and car rides to spot animals every morning before school, or with their dad, who ran a program teaching children math and reading. “Catching salamanders and watching hawks teach their babies how to fly in our backyard really shaped our interest in the natural world,” said Dakota McCoy. 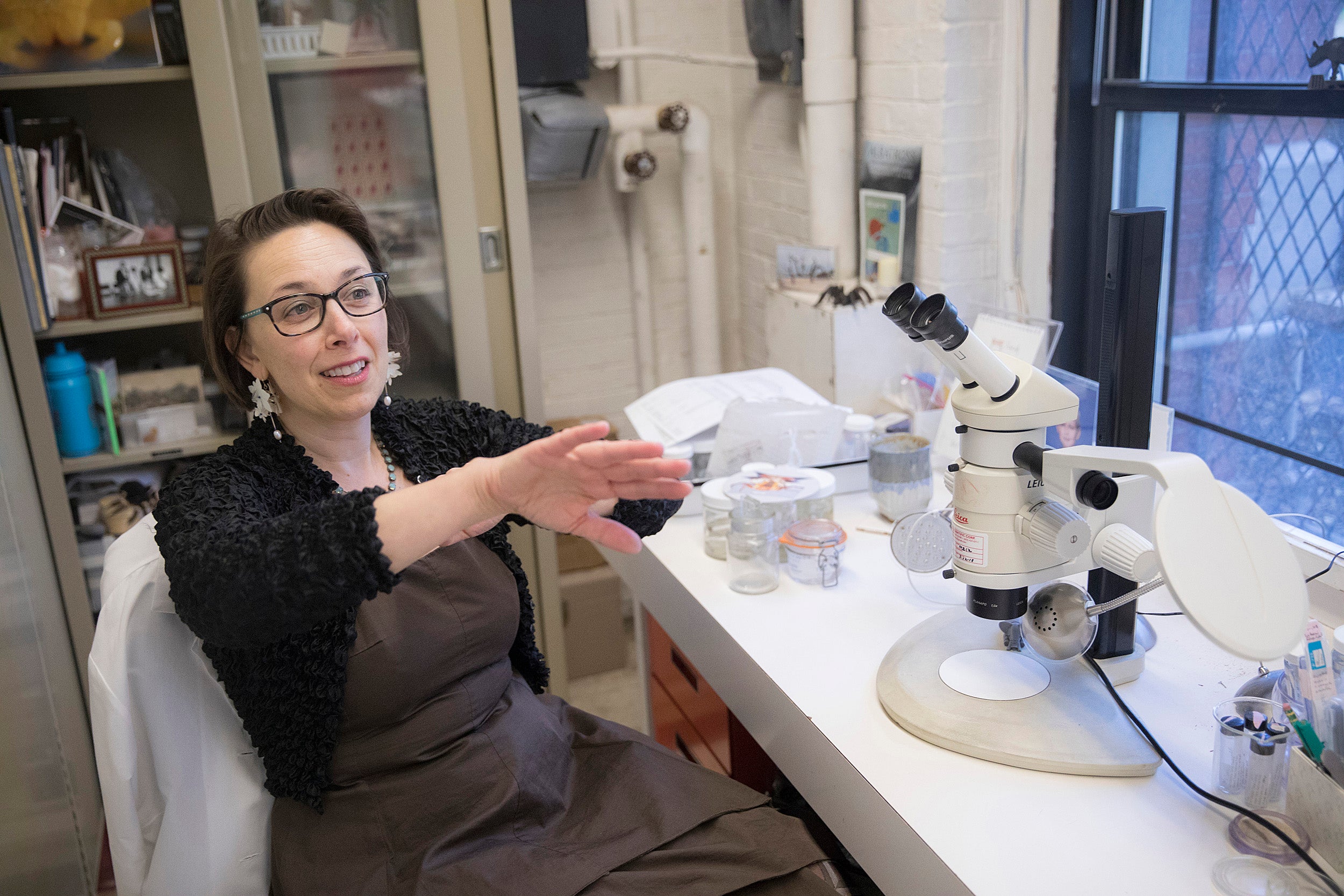 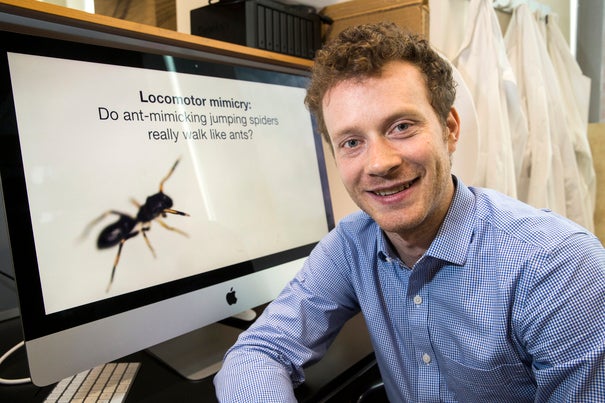 To conduct their research, the McCoys and the team used a powerful scanning electron microscope, as well as imaging and optical modeling, to show that the jagged bumps on the peacock spiders enhance absorption of the black pigment, trapping rather than reflecting nearly all light. Their colleagues Anna Shneidman and visiting Fulbright scholar Nikolaj K. Mandsberg in Joanna Aizenberg’s lab at the John A. Paulson School of Engineering and Applied Sciences used software to simulate the interaction of light with structures on the male peacock spiders to provide evidence that bumps indeed absorb light.

If successfully fabricated, the miniature lenses wouldn’t be the first and certainly won’t be the last technology modeled after a natural processing system. Understanding how kingfishers dive into the water with little to no splash has reduced noise and loss of efficiency from the pressure differential of bullet trains entering mountain tunnels. Engineers have also modeled the air systems of skyscrapers after tunnels in self-cooling termite mounds.

“There’s value in just describing the diversity of forms on Earth because you never know what will become useful,” said Dakota McCoy.