Imagine standing in the middle of Harvard Square and the swirling cacophony that comes with it: the thrum of passing cars, the rumbling of trucks and buses, the chattering tourists and students, and a busker or two competing for attention. Now imagine trying to filter out all that noise and pick up a whisper from a block away, and you have some idea of the challenge facing seismologists. 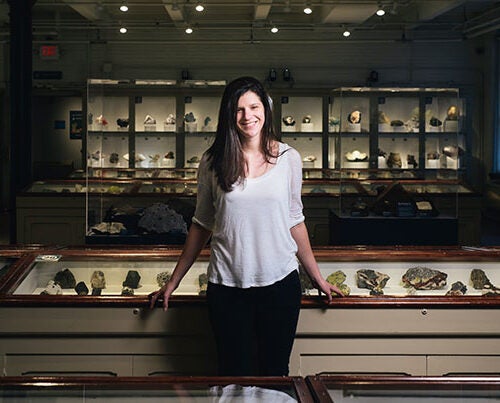 Marine Denolle, assistant professor of Earth and planetary sciences at Harvard, is one of several co-authors of a study that used computer-learning algorithms to identify small earthquakes buried in seismic noise. Other authors are Thibaut Perol, who has doctoral and master’s degrees from the Harvard John A. Paulson School for Engineering and Applied Sciences and the Harvard Institute for Applied Computational Science, and Michaël Gharbi, a doctoral student at Massachusetts Institute of Technology. The study was published in the journal Science Advances.

While researchers hope the algorithm may one day allow for development of a system for real-time earthquake detection, the ability to track limited “micro-seismicity” should help scientists draw a clearer picture of a number of processes in the Earth.

“We can use this data to map fluid migration, whether it’s magma or wastewater or oil,” Denolle said. “In addition, there is a redistribution of stresses after an earthquake … but it’s very difficult to understand that process because the only data points we have are the earthquake, so we have to infer our models from there. This can help give us a more complete picture.”

Denolle said that studying the data will be easy — because it’s already being collected.

“Seismometers are incredibly sensitive,” she said. “They can pick up signals from everything from a person walking to ocean waves hitting on the shore to the movement of a tree’s roots as it sways in the wind.

“But the signals of these smaller earthquakes are buried in that background noise,” she continued. “This is really about signal detection. That’s why deep-learning techniques are useful — because you can extract features from the noise.”

To build an algorithm capable of sorting through that seismic noise, Denolle and colleagues went to Oklahoma.

There, researchers spent nearly two years collecting data on more than 2,000 recognized earthquakes. That data, along with seismic noise, was used to train a learning algorithm to pick out previously unidentified quakes hidden in the information.

“We found that in a typical month, where there might be 100 earthquakes detected, there were actually at least 3,500 events,” she said. “That’s two or three orders of magnitude larger. So it works, but what we wanted to do was not only to detect earthquakes but to identify and locate them in real time for early warning systems.”

To provide that early warning, Denolle said, the system has to work fast, so Perol designed the algorithm at the heart of the system with efficiency in mind. Because of the massive amounts of data collected in the field — some data sets are as large as 100 terabytes — Denolle said traditional algorithms could take minutes or longer just to analyze the data from a single day.

“But with the code we developed, it works in seconds,” she said.

Denolle and her colleagues later applied the algorithm to include seismic data collected in Spain, and it was able to identify earthquakes, even though seismic stations were placed further apart and the quake waveforms were dramatically different from those used to train the system.

“We applied this code blindly, with all the optimization for Oklahoma, and it still detected most of the earthquakes,” Denolle said. “That suggests that this code is very generalizable.”

Going forward, Denolle said she hopes to refine the algorithm to improve the ability to pinpoint the location of earthquakes. She plans to conduct additional tests using larger data sets, like those collected around volcanoes.

“This is level one. We need to detect earthquakes to understand what’s going on in the Earth,” said Denolle. “Looking at these smaller events might tell us something about bigger events … so this is fundamental.”

This research was supported with funding from the National Science Foundation, Southern California Earthquake Center and the U.S. Geological Survey.