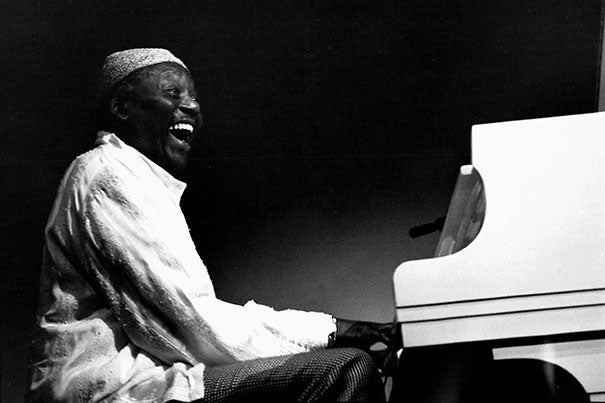 The sweep of jazz history

Exhibit examines impact the golden age of radio had on society

It’s almost impossible now to imagine a time when listening to the radio was an American pastime.

But when visitors walk through the doors of The Collection of Historical Scientific Instruments’ Special Exhibition Gallery on the second floor of the Harvard Science Center, they are quickly transported back to an era when the radio was the centerpiece of the living room, the mainstay of broadcast media, and a tool that connected people much like the internet does today.

“Radio Contact: Tuning In to Politics, Technology & Culture” lets visitors time travel through radio’s start in the 1920s, through its golden age, and finally to the modulated listening technology at our fingertips in the 21st century.

“Radio transformed our world by new technologies of communication that promoted dialogue,” said Sara Schechner, the David P. Wheatland Curator of the Collection of Historical Scientific Instruments in the Department of the History of Science. “The exhibition explores the cultural transformation wrought by radio communication and how broadcasts across the country not only knit regions together to create a national identity, but also brought Jelly Roll Morton into neighborhoods where no black jazz musicians could go.”

From the earliest broadcasts of news and politics, to jazz, comedy, dramas, and baseball, the evolution of radio is revealed in the archival exhibit that explores listening, tinkering, and broadcasting. A year in the making, “Radio Contact” showcases the medium’s changing equipment and technology, the vacuum tubes, antennas, microphones, meters, and speakers that brought the “wireless” to listeners far and wide. 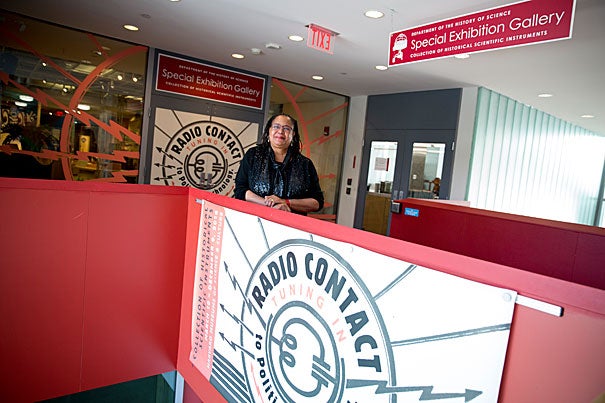 “The history of radio technology is a story of tinkering in army barracks, labs, and ham shacks, but this exhibition is not just about the nuts and bolts, sparks and vacuum tubes, or antennae that united radio pioneers to a wider community of ham operators,” said Schechner. “It examines how equipment entered the home to create a new listening experience.”

The exhibit is the first that the Collection of Historical Scientific Instruments (one of four museums in partnership with The Harvard Museums of Science & Culture) has designed as a hands-on, multidimensional experience. “Radio Contact” even includes a 1949 radio with a 3-D printer and computer inside that lets students and visitors tinker with the works. Jean-François Gauvin, director of administration at the Collection of Historical Scientific Instruments, said the idea was to create something innovative, dynamic and fun for people of all ages and in different fields.

“Our door is open, you can spend 15 minutes or two hours,” said Gauvin. “This is worth discovering and talking about.”

Although the pure sound of radio evolved into the more sensory experience of television and then computers, “Radio Contact” shows that the thrill of having technology at our fingertips isn’t new. It includes the crystal sets originally built in garages and basements by hobbyists who would spend hours connecting wires, turning dials, and listening for any signal or connection to the airwaves — for another voice on the radio. Visitors can actually “tune in” and listen to hundreds of original recorded radio soundbites spanning 60 years.

The exhibit also highlights the roles played by students. From the curatorial students who helped assemble the show to a recent panel examining the role women played in the 1970s International Women’s Day Radio Project, it imparts collaborative connection.

“We are a small museum so we depend on faculty and students to bring fresh ideas, design exhibits, research, and organize events that are in relation to our exhibits,” Gauvin said. “Students play a concrete and useful role in the production and life of our exhibitions.”

Michelle Frank, a student in Harvard’s Ph.D. neuroscience program and moderator of last Thursday’s podcast event, said the gallery space was perfect to tie in the history of broadcast radio with podcasting. Recorded in front of a live audience, the podcast was a collaboration between Science in the News and the Academic Ventures of Radcliffe Institute for Advanced Study, in association with Radcliffe’s spring conference, “Game Changers: Sports, Gender, and Society,” scheduled for April 7, 2017.

“All the groups involved have a similar history and interest in both the preserving of and informing about these histories that we are looking at in this exhibit,” said Kristen Osborne ’15, a program associate in academic ventures at Radcliffe Institute. “There is an intersection of things here, combining ideas, it’s a really good match.”

“Radio Contact” is free and open to the public through Dec. 9, 2016. The November 9 talk by University of Michigan professor Susan Douglas  “From Jazz to Hip Hop: Radio as a Turnstile Between White and African-American Cultures” has been canceled.