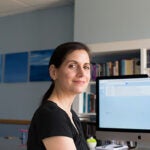 For the philanthropist it wasn’t one “aha” moment that turned him vegan and into an outspoken supporter of farm animals, it was a series of moments: dinner with a passionate vegetarian; the realization that a beautiful pet is essentially “no different from a beautiful cow”; the book “Animal Liberation” by Princeton philosopher Peter Singer.

Then there was the fundamental question about the human — and animal — condition.

“There is a logical path from existentially wondering how we can do the most good to helping farm animals,” said Thomas, adding: “Young people who are contemplating how to mitigate the most suffering should consider helping farm animals, where an ordinary person can positively affect millions of lives.”

Billions, in fact, when you count chickens.

According to the U.S. Department of Agriculture, 9 billion chickens, 115 million pigs, and 29 million cows were slaughtered in 2015 in the United States. Across the country, farmed animals are unprotected by any federal rules until shortly before slaughter and are exempt from the majority of state cruelty laws. Those facts stand in sharp contrast to a nationwide 2012 poll by the American Society for the Prevention of Cruelty to Animals in which 94 percent of respondents said that animals raised for food should be free from abuse or cruelty.

The confinement of factory-farmed animals has become a hot-button issue in recent years, with McDonald’s and Walmart among the more than 200 U.S. companies pledging transitions to cage-free egg supply chains. A current Massachusetts ballot initiative seeks to prohibit keeping egg-laying hens in battery cages, confining mother sows in gestation crates, and tethering veal calves so they cannot move. The proposal also calls for banning the sale of food items produced in other states using such types of confinement.

“The Massachusetts ballot measure is poised to be the single most progressive piece of farmed animal protection legislation ever passed in the United States,” said Christopher Green, executive director of Harvard Law School’s Animal Law & Policy Program. “Having this happen in our backyard as our program gets off the ground has allowed us to analyze the process in the classroom and given our students the opportunity to gain invaluable experience working directly on the campaign.”

Thomas has found a welcome partner in the HLS program. With his recent gift of $1 million and a subsequent matching gift of $500,000 to support individual donations of up to $50,000 through December, he is hoping to make farm animals central to animal cruelty prevention. It’s a shared concern.

“The Thomas Fund will support the critically important work of the Animal Law and Policy Program. I look forward to seeing how it will advance research and teaching to improve the welfare of animals,” said Harvard President Drew Faust.

“How humans raise animals for food in this country and around the world affects animal welfare, human health, food safety, workers’ rights, as well as climate change and the environment,” said Dean Martha Minow. “With the leadership of the Animal Law & Policy Program, and the marvelous generosity of [Charles] Thomas, Harvard Law School pursues scholarship and work at the forefront of these critical concerns, and I am so grateful.”

The gift is to be used as the program’s directors see fit, beyond a few important stipulations, said Green.

“Charles wanted his resources to go toward items not already budgeted for, and he wanted the entire sum to be spent within seven years to ensure the gift would be implemented right away and help the program immediately expand upon its existing efforts.”

The gift has supported a new fellow to work on animal welfare aspects of a larger U.S. farm bill policy analysis being run by the HLS Food Law and Policy Clinic. Given the substantial impact factory farming has on animal welfare, public health, and environmental degradation, said Green, the program plans to hire additional fellows to work on farmed-animal policy in the coming year.

The program’s work reaches well beyond U.S. borders. Its faculty director, Kristen Stilt, is collaborating with Harvard’s South Asia Institute to examine animal agriculture from the Middle East to Asia.

“The goal is to produce a comprehensive report on such practices and their consequences to set a baseline for deeper policy analysis,” said Stilt, a professor of law who noted that the factory-farming model under fire in the United States “is on the rise in the rest of the world.”

Stilt is also studying the emergence of animal-protection provisions in constitutions worldwide and conflicts between animal welfare and religious freedom in cases of ritual slaughter.

Animal welfare has long been a concern for both Green and Stilt. An expert in Islamic legal studies, Stilt became involved with several animal-advocacy groups while in Egypt carrying out research for her Harvard Ph.D. in history and Middle Eastern studies. In Cairo, she conducted undercover investigations at animal slaughterhouses and worked to help curb the stray animal population problem.

Green, who owns and manages an Illinois farm that has remained in his family for nearly 180 years, dreamed of becoming a veterinarian before attending Harvard Law School. He has published his own scholarship on animal legal issues and worked for several years with animal-protection organizations before returning to Cambridge in 2015 to help lead the HLS program.

Stilt and Green see the program’s mission as threefold: expanding educational opportunities in animal law and policy; increasing the quantity and quality of academic research and scholarship in the field; and helping inform broader communities about the legal aspects of animal welfare issues.

In just the first year they made strides in all three, thanks in part to a gift in 2014 from the founder and president of the Animal Welfare Trust, Bradley L. Goldberg, whose support built on the 2001 Bob Barker Endowment Fund for the Study of Animal Rights at HLS.

Course offerings at the School have expanded from an animal-law class first taught in 2000 to a new course on wildlife law and an offering on farmed-animal law set for next fall. Last year the program welcomed its first academic fellow, Delcianna Winders. That fellowship is focused on research and scholarship and on preparing recipients for a tenured teaching position in the field. In December, the program’s first major conference will convene a variety of experts to reflect on the 50th anniversary of the Animal Welfare Act.

Silt and Green agree that raising awareness is one way to help spark legislative reform around issues of animal welfare. For Thomas, a big step toward awareness is stronger support for research and scholarship in the field.

“Farm animals are still mostly an afterthought in the academic and major donor communities,” said Thomas. “I hope this gift changes that by providing scholars the freedom to pursue careers in animal advocacy, and demonstrating to other universities and philanthropists that investing in animal care benefits humankind and all life on our planet.

“History will render a harsh judgment on contemporary animal agriculture,” he added. “Gandhi wrote, ‘The greatness of a nation and its moral progress can be judged by the way its animals are treated,’ and Harvard will undoubtedly help shape a more humane vision for future society.”