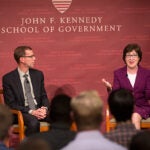 As Barack Obama’s historic presidency winds down, scholars are beginning the complicated undertaking of assessing the impact of the nation’s first black president.

At the symposium’s opening Wednesday evening, panelists said Obama’s leadership addressing racism and policing — both in getting parties to the negotiating table while quelling the emotional tinderbox of protests and counterprotests, and in his relentless push for meaningful criminal justice reform, particularly around mass incarceration — will be seen positively in the coming decades.

“I think President Obama will go down as one of the most productive presidents, in terms of legislation, that we’ve had in a long time,” said Avik Roy, president of the Foundation for Research on Equal Opportunity and opinion editor for Forbes magazine, and a former policy adviser to Sen. Marco Rubio, Gov. Rick Perry, and Mitt Romney. Citing the Affordable Care Act, Dodd-Frank, and the 2009 federal stimulus bill, Roy said, “His goal was to be the liberal Reagan and I think in many ways, he was.”

Paul Monteiro, acting director of the U.S. Department of Justice’s community relations service, agreed, noting that Obama got consequential legislation passed despite very stiff and longstanding obstruction from Congressional Republicans even when their interests and the White House’s aligned. The sweeping analyses of police departments in Ferguson, Missouri, and Baltimore and the aggressive pursuit of consent decrees by the DOJ’s civil rights division have been meaningful in jump-starting reform of police practices.

Beyond the symbolism of having a black man in the White House, Historian Leah Wright Rigueur, an assistant professor of public policy at HKS, asked the panel about Obama’s effect on policy and social movements.

Noting the black cultural renaissance that has flowered amid the Black Lives Matter movement during his presidency, activist Brittany Packnett praised Obama for his frequent public acknowledgement and celebration of black arts and culture.

“That kind of black representation matters,” she said, because it “offers a real legitimacy in the American canon. That it’s not just the ‘stuff of black people,’ [but a recognition that] our art forms are American treasures.”

Despite all of the racial animus and political resistance against him, Obama has been criticized for being “a respectability president” who hasn’t been aggressive or progressive enough on issues such as education, poverty, and immigration, said Rigueur.

Roy said Obama handled such treatment with remarkable “grace,” but said there are valid criticisms of his policies, such as stagnant wages and growth and a sluggish recovery that’s done little for those at the bottom, that don’t involve racism.

“There’s always an expectation of grace, of dignity, of a certain magnanimity that says ‘I know you wronged me, but I will not stoop as low as you have,’” said Packnett, co-founder of Campaign Zero and vice president of Teach For America’s National Community Alliances, on the expectation that black people in power won’t react to blatant disrespect. “That is a no-win situation when you’re a black man in the White House, because you’re either going to be too docile or too angry. And being human … is something I do not think is something [that] has been afforded to him over the last eight years, both because of his position and because of his race and because of his gender.”

Monteiro said Obama made it clear to those working in the administration that there was no one way to be black. “I reject the respectability [argument] because I think he has done it his way, but he’s allowed space for people to do it their way.”

As to criticism that the Obama administration has done a lot more talking than delivering results on racism and reform of the police and criminal justice systems, analysts said he’s accomplished more than people give him credit for.

“There are lots of things I think still need to be done,” said Packnett. Still, she said, by talking about these issues repeatedly, forming a policing task force in 2015, and convening meetings between activists, police, legislators and others to look for common ground and begin changing how police and black communities interact, “there’s a way in which he and this White House have brought this conversation into people’s living rooms that may not have happened otherwise.” Obama’s July visit to a federal prison in Oklahoma, for example — the first such by a sitting president — “humanized” the prisoners and brought the issue of mass incarceration to life.

Obama has brought new, previously marginalized voices into the public square and validated the need to address their problems, said Monteiro. “I think he’s made the most of his moment.”