Coming of age, setting a goal 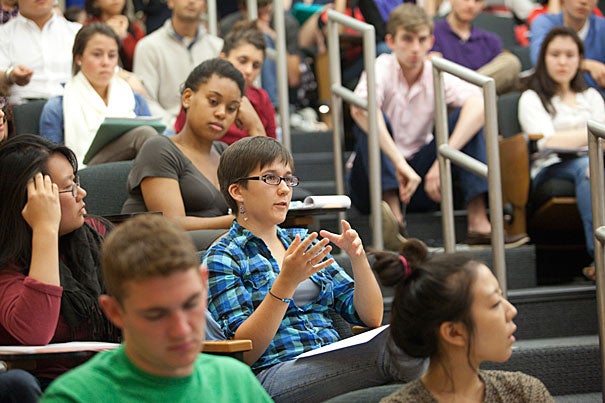 Hanna Amanuel ’16, child of Eritrean immigrants, plans to help others as she was once helped

Hanna Amanuel ’16 knows something about dignity. Even as a child in the Bronx, she saw it in places where others might not: in the bravery of new immigrants, in the potential of the low-income grade schoolers around her, and in her mother, a proud woman from the Horn of Africa.

Amanuel will graduate from Harvard College in May. With her sharp intelligence, a fresh degree and the future that it implies might seem like a given — an accomplishment, but not an unusual one. That is not the case. She got to this point, she says, because mentors of color drew her onto a path that included competitive private schools, role models, and the reassurance that she could succeed.

She had not been given a chance to excel as a child attending schools in the Bronx. Her parents had moved from Eritrea, a postwar country in East Africa, and were getting by without a command of the language or many financial resources. In fourth grade, children were tracked into either an honors or average level. The first group was nearly all white and Asian students, and the latter nearly all black and Latino. Despite having skipped a grade, Amanuel was denied a spot in the honors class.

Racial disparities were clear to Amanuel even then, but the prejudicial structures beneath them were not. “As a child, I wasn’t aware of why it was that way. But I definitely felt like I wasn’t supported. I felt like the school didn’t see potential in me,” Amanuel says. “I did not imagine that I might go to a school like Harvard.”

Fortunately, she was noticed by Prep for Prep, a leadership and academic development program in New York City that offers promising students of color access to greater opportunities. With their assistance, and the steady guidance of supportive parents, she went on to attend a top private high school, Trinity School.

“I think that’s when I first started seeing myself as someone who could reach these high places,” she said, and that feeling was heightened when she visited Harvard on a college tour. She was hosted by a Nigerian student, a graduating senior with a connection to Prep for Prep. “She was super chill and very smart and also, like me, an African woman. She made me feel comfortable and like maybe I could do well here, too.”

Amanuel, who is on the pre-medicine track studying social anthropology and global health and health policy, focused her senior thesis on the national campaign against female genital cutting in Eritrea. Thanks to funding from Harvard’s Weatherhead Center for International Affairs and the Center for African Studies, she spent several months last year doing fieldwork in Africa. She interviewed anti-cutting campaigners, medical professionals, and women in Asmara, the capital city, and rural areas outside of the capital.

Her interest focuses on the experiences of women who have undergone genital cutting, many of them as babies, and moved forward with their lives. These dignified African women do not define themselves around this singular practice but hear constantly that they are “victims.”

“My project arose from a lot of what I have witnessed among women I know … They feel a measure of discomfort with the ways in which their bodies are viewed by physicians and by people in general. Female genital cutting is often called ‘female genital mutilation’ and gets cast as this sort of ‘barbaric’ African practice. I think that my thesis emerged from a desire to look at the multiplicity of Eritrean women — to deconstruct a lot of the understanding that people have of this practice and of Africa.”

After graduation, Amanuel is heading to Oxford University on a Harvard-UK Fellowship. She thinks she’ll take African studies. She intends eventually to become an obstetrician-gynecologist and maternal health advocate in the Horn of Africa. She wants to improve access to quality reproductive health care, to foster an environment in which African women are treated with dignity and are encouraged to seek out medical care.

“It’s really important for me to help with healing on a personal level, as a physician, but also at the community and structural levels as a researcher and activist. My uncle, a doctor in rural Eritrea for more than 20 years, taught me well,” she said.

This spring, Amanuel has hosted high school students on a Harvard tour. They are women of color, veterans of Prep for Prep.

“My advice to people, especially women of color from backgrounds like mine, is don’t get discouraged. If at first you feel out of place and struggle to find community, don’t lose heart. You deserve to be here.”