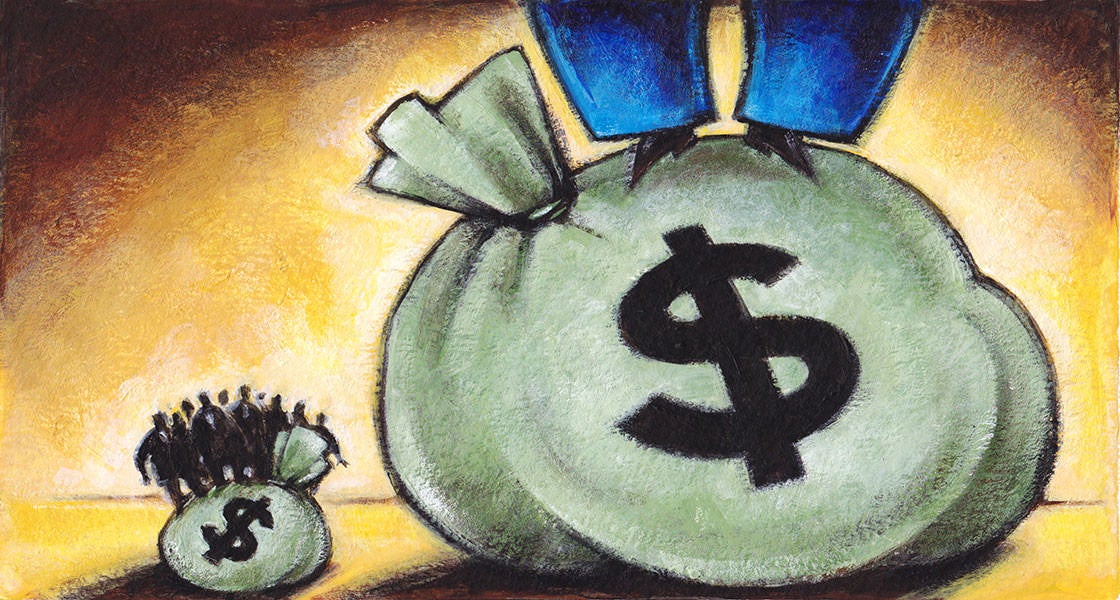 If it weren’t for Harvard, “Spotlight” never would have been made. That’s what Walter V. Robinson said at the outset of his talk at the Harvard Kennedy School (HKS) on Tuesday. Robinson, the Boston Globe editor played by Michael Keaton in the film, left the audience in suspense regarding the Crimson connection until after he finished his prepared remarks and opened the floor to questions.

Sure enough, the first questioner, an HKS student, asked him to elaborate on what turned out to be a key link in an unlikely chain of events. The movie is a “small miracle,” said Robinson, considering “all the hurdles that Hollywood usually puts in the path of stories like this” — that is, since it’s an unglamorous journalism procedural “without car chases or explosions or sex.” The film’s now up for several Oscars, including best picture.

Here’s what happened, in a nutshell. Robinson helmed the Globe Spotlight Team investigation that painstakingly pried the lid off the child abuse scandal in Boston’s Roman Catholic archdiocese in 2002. It was a local story with national, even global repercussions. In early 2003, the then-editor of Nieman Reports, a publication of Harvard’s Nieman Foundation for Journalism, asked Robinson to write an article detailing the newspaper’s work and the church hierarchy’s cover-up. A few years later, Robinson’s article caught the attention of a Columbia journalism professor, who sent a researcher to Boston to interview the Globe’s Spotlight team staff and write a case study on the series.

Later still, that researcher “was out in California and was introduced to a couple of young producers,” Robinson said. The rest is Tinseltown sausage-making. A screenwriter and director were found, “Keaton read the script and said ‘I’m in,’” and so forth. Except in this case, the filmmakers weren’t angling for a big payday. The actors worked for the industry minimum because they cared about the project. “Keep in mind,” Robinson said, “Johnny Depp was paid $20 million just for his acting in ‘Black Mass’ — and the entire budget for this film was $20 million.”

Given the compression of a five-month period into two hours, Robinson said, “The film captures accurately what we did, how we did it.” Keaton nailed his character, though Robinson, by his own admission, looks more like Lee Marvin, the star of the classic war movie “The Dirty Dozen.” (And in fact, the reporter began his career as an Army intelligence officer in Vietnam.)

Released in November, “Spotlight” has earned praise for its honest portrayal of the plodding, methodical work that at last bared the church’s “conspiracy of silence,” as Robinson put it. The stories of children who were molested or raped by priests are told entirely in the words of victims, just as the reporters learned them, sitting across a table, as opposed to recreated via flashbacks. The horror is no less vivid for it.

Walter V. Robinson, editor at large for The Boston Globe, discussed the Globe’s investigation into the Catholic Church sexual abuse scandal, the Oscar-nominated film “Spotlight,” and the future of investigative reporting.

That largely took care of the first part of Robinson’s advertised topic — “How Hollywood Came to Celebrate What Newsrooms Believe Is No Longer Worth the Cost.” Roughly 90 people turned out for the lunchtime talk “in the aftermath of the Blizzard of 2016,” quipped Robinson, who is now editor at large for The Globe after several years away from the paper, teaching at Northeastern University.

Many attendees were mid-career journalists studying at the Kennedy School. The Shorenstein Center on Media, Politics and Public Policy sponsored the event. As for the second part, Robinson had a great deal on his mind. “At most newspapers, the prevailing view among editors is, ‘Investigative reporting is a luxury we can no longer afford.’” They’re wrong, he said: “The fact is that investigative reporting is a necessity that we cannot afford to do without. … It’s our obligation as newspeople to hold powerful institutions and individuals accountable, because if we don’t, who will?”

Without the public scrutiny that a well-funded news organization can bring to bear, Robinson said, democracy suffers. And it’s often the voiceless victims, people “being run over by society,” he said, who suffer the most.

A Shorenstein Fellow in the audience, Joanna Jolly of the BBC, asked Robinson, “How can we persuade editors that it’s more important to cover [long-term] stories than the big set-piece events?” Jolly said that amid budget cuts at the BBC, reporters are now encouraged to undertake investigative projects on their own time before the network will commit resources.

Robinson called it “disquieting” that the same belt-tightening that plagues small newspapers would also afflict a respected outlet like the BBC. Similarly, he cited Margaret Sullivan’s recent Public Editor column in The New York Times about how her paper failed to examine thoroughly the tap-water-contamination scandal in Flint, Mich. “I find that really frightening. The best newspaper in this country, which still has 1,200 people in its newsroom, couldn’t find a couple reporters to go deep on that?”

Although newspaper revenues are plummeting and long-form reporting is expensive, Robinson said, “I would argue that it’s worth swallowing hard and finding something else [in the budget] to lose.”

While Robinson blames the Internet for “hollowing out newspapers, because it’s basically stripped us of much of our revenue,” he points out that the same technology has put valuable tools into the hands of even daily beat reporters.

For example, in 2006, Attorney General Tom Reilly, the favorite for the Democratic nomination for governor of Massachusetts, picked legislator Marie St. Fleur to be his running mate, Robinson recalls. “I came into work early that morning, and because I’m a snoop, I just went to the real estate database, which is all online now, and in 30 minutes time I discovered that she hadn’t paid her property taxes the prior year, and that she had an IRS tax lien on her for $14,000.”

When Robinson got St. Fleur on the phone, “She also admitted she had $40,000 in unpaid student debt. And by the next day she was gone from the ticket as his lieutenant governor. That real estate database work, if you had done it in the mid-1990s … would have taken probably a week.”

Comparisons between “Spotlight” and “All the President’s Men” are inevitable, and not only because Robinson’s boss at the time was deputy managing editor Ben Bradlee Jr., the son of Bob Woodward and Carl Bernstein’s boss at The Washington Post. Robinson hopes that “Spotlight” might inspire a new generation of investigative reporters, just as the Watergate scandal inspired his own in the 1970s.

Indeed, “I sometimes think of [Cardinal Bernard Law as] like Richard Nixon,” said Robinson. Law resigned the archdiocese of Boston in disgrace after it became clear he had known about and effectively enabled the abuse on his watch. He evaded prosecution because Reilly, the AG, could find no crime within the statute of limitations, and for a time he headed a basilica in Rome, though he gave that up when he turned 80 in 2011.

But “he didn’t get a promotion,” said Robinson. “He’s living in a two-room apartment in the Vatican, and he’s not well.” (Reports coming out of Rome indicate that Law is in ill health.) Like Nixon, Law “was someone at the pinnacle of his power, and he abused that power in extraordinary ways, and like Nixon, he went off to a comfortable retirement, but really lost everything that was important to him.”