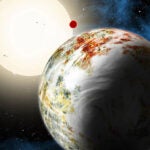 The U.S. Environmental Protection Agency (EPA) has issued its long-awaited draft regulations on carbon emissions from U.S. power plants, which would require a 30 percent reduction in carbon dioxide emissions from 2005 levels by 2030. Just days before Monday’s announcement, scientists from Harvard and Syracuse universities released a study highlighting the potential health benefits of such changes.

While the federal regulations, to be finalized next year, are aimed at reducing the emission of globe-warming carbon dioxide, since they would decrease pollutants from power plant smokestacks, there is a significant ancillary benefit for human health.

Studies have indicated that air pollutants like sulfur dioxide, nitrogen oxides, mercury, and fine particulate matter that penetrate deeply into the lungs not only harm people with pulmonary conditions such as asthma, they also affect the cardiovascular system and can lead to thousands of premature deaths, along with thousands of days lost from work and school because of illness.

The Gazette spoke about the EPA’s rule with Kathy Fallon Lambert, director of the science and policy integration project at the Harvard Forest, and Jonathan Buonocore, a research fellow at the Harvard School of Public Health (HSPH), who authored the health-benefits study along with Charles Driscoll of Syracuse University.

GAZETTE: Can you describe what the EPA did on Monday?

LAMBERT: The EPA unveiled the centerpiece of the president’s climate-action plan. It is a new set of standards for reducing carbon dioxide emissions from existing power plants. The proposed standards will reduce CO2 emissions by 30 percent from 2005 levels by 2030. And they allow states a lot of leeway and flexibility in how they comply.

GAZETTE: Why is this important from a climate-change perspective?

LAMBERT: I would add that it also sends an important signal internationally, that the U.S. is moving forward with concrete actions to reduce greenhouse gas emissions from its largest source.

GAZETTE: Is this rule also important for human health?

BUONOCORE: Power plants are also a big source of air pollution, in the form of fine particulate matter and ozone, which are the two main components of smog. A lot of different health impacts have been associated with exposure to air pollution, mostly respiratory effects or cardiovascular disease. Its impact can range from missing days of work or school, to asthma exacerbations and asthma attacks, all the way through heart attacks and premature deaths.

These regulations will change how electricity is generated in the country in order to meet carbon emission standards. And, in the process, they’re going to affect emissions of these other pollutants, like sulfur dioxide, nitrogen oxides, fine particulate matter, and mercury. If these emissions go down, there will be benefits for human health.

GAZETTE: I thought the air had gotten cleaner in recent decades. How is the air quality today?

BUONOCORE: It’s definitely improved since the ’70s. We’ve had a lot of improvement because of the Clean Air Act, especially reductions in fine particulates and SO2 [sulfur dioxide] emissions. It is better than it has been, but that doesn’t mean the levels of air pollution we’re experiencing are necessarily safe.

There is still some excess risk of these different health effects due to what we’re being exposed to today. One of the co-benefits of this carbon regulation is that it will also have benefits to health, by reducing air pollution further.

LAMBERT: We were on a call with President [Barack] Obama [Monday]. He said that there are 26 million Americans with asthma and 7 million children. In addition, there are a number of studies to suggest that higher temperatures under climate change could exacerbate ozone formation, increasing the risk of some of these health effects.

GAZETTE: So, aside from the climate issues, if the temperature goes up, health effects from existing air pollution are expected to worsen?

LAMBERT: Even to hold air quality steady, we need to continue to drive down emissions of nitrogen oxides and sulfur dioxide.

GAZETTE: Tell me how your study relates to Monday’s draft rule release.

BUONOCORE: A lot of groups have been trying to figure out the effects of different possible EPA regulations on electricity generation. We received a small subset of results [from computer models] that were designed to represent low, medium, and high policy options. These runs simulated what’s going to happen to the electrical grid, and we ran them through air-quality models and another platform to get the human health benefits of the policy.

LAMBERT: In order to estimate and map improvements in air quality, you have to link changes in emissions that come out of the smokestack, as SO2 and NOx [mono-nitrogen oxides] mercury, with the complex chemistry [in the atmosphere] to simulate changes in the concentrations of fine particulate matter, ground-level ozone, and of the atmospheric deposition of sulfur, nitrogen, and mercury. Thereare multiple parts of the study. The first part is, “How do emissions change?,” and the second part is, “What does that mean for air chemistry?” Then it goes to, “What do changes in air chemistry and air quality mean for human health and the environment?”

GAZETTE: So, which of your scenarios or policy options does the EPA draft regulation match most closely?

LAMBERT: It’s closest to what we call policy option 2. We modeled a 36 percent reduction in CO2 emissions from 2005, which is pretty close to the EPA rule.

GAZETTE: And what are the benefits versus costs in that?

LAMBERT: We found that all states will receive some benefit in terms of air-quality improvements for ground-level ozone and fine particulate matter. We mapped those benefits and found that the greatest improvements occur in the Ohio River Valley and in states in the Rocky Mountain region, areas where air quality currently is poorest and where there are the largest sources of power plant emissions.

GAZETTE: How do you characterize the EPA’s plan? Ambitious? The minimum we should expect? Somewhere in between?

LAMBERT: The way I view it at this point is it is an achievable step in the right direction. By being flexible, it’s likely to get the most cost-effective reductions in the shortest time.

BUONOCORE: I would agree with that. It seems they are combining some of what’s called “within the fence line” modifications — that means modifications to existing power plants — with other flexible options, like doing energy efficiency measures, to help each state meet the requirements.

LAMBERT: I would also add that we have a lot of work to do in the coming weeks and months to fully analyze and understand just what it will mean. We will know more as states start to develop their implementation plans. Flexibility is good, but it also means that the outcome is less certain.

GAZETTE: Is this the long-awaited U.S. action on climate change that everyone has said we’ve needed for so long? Does it approach what is needed globally to address the problem?

LAMBERT: We have a long way to go to address climate change, but this is an important step in the right direction. That is an important message, because I think it would be unfortunate to undermine this rule by saying it may not solve the whole problem. I think the reality is that addressing climate change will require a lot of small actions that incrementally add up to making the difference we need to see.

GAZETTE: If there were one message the public should take from your study and Monday’s news, what would it be?

LAMBERT: A carbon standard like the one the EPA introduced will decrease emissions of many other pollutants that are harmful to people. And, as a result of lowering these other harmful pollutants, our air quality will improve. And that’s a win for our health, our environment, and our climate.