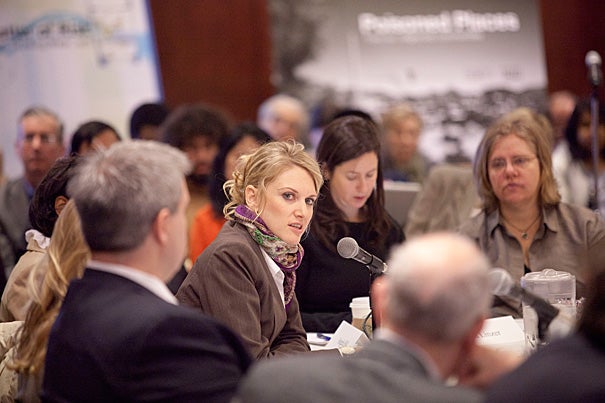 In 2008, when Lawrence Lessig was considering a run for Congress in California, the famed political strategist Joe Trippi agreed to run his campaign — on one condition.

“He said, ‘You’ve got to promise me one thing,’” Lessig, now Roy L. Furman Professor of Law at Harvard Law School, recalled. “‘That you will get on the telephone for two to four hours every single day, between now and the day you decide you no longer want to be in government, and call people you’ve never met to ask them for money.’”

The decision was an easy one. When faced with the hard reality of America’s money-driven campaign system, Lessig — like an increasing number of Americans — opted out.

Lessig explored ways of fixing America’s campaign finance system in a discussion of his latest book, “Republic, Lost: How Money Corrupts Congress — and a Plan to Stop It.” The talk, held at Boston’s Hyde Park Branch Library, was part of the John Harvard Book Celebration, a semester-long series of events at Cambridge and Boston public libraries in honor of the University’s 375th anniversary.

The framers of the Constitution intended to build a legislature “dependent upon the people alone,” Lessig said, quoting the Federalist Papers. Today, lawmakers depend less on the people than on the funders. Politicians develop a “sixth sense, a constant awareness of how what they do will affect their ability to raise money.”

“The wrong attention draws Congress’ attention constantly away from what the framers thought they should be paying attention to,” he said.

The widespread opinion that politicians are captive to major campaign donors partly explains why congressional approval ratings hover at a dismal 10 percent, Lessig said. Three-quarters of Americans think money buys results in Congress, a belief that erodes voter trust and participation in our political process, he said.

Regardless of how loudly money talks, that money comes from an increasingly rarified group of Americans. Only 26 of 1,000 citizens gave more than $200 in the last election cycle, according to Lessig. One of 1,000 Americans contributed more than $10,000. Of all the money spent by so-called Super PACs this election cycle, 80 percent came from just 196 individuals. (For those in want of a handy slogan, that’d be “the .0000063 percent.”)

Still, most Americans balk at the idea of campaigns underwritten by their tax dollars. Conservatives in particular, Lessig said, argue, “There’s something wrong with my money subsidizing your speech.”

There is a middle ground, however: representative-funded campaigns. Connecticut, Maine, and Arizona’s state legislatures have all adopted systems that limit individual contributions, whether by allotting each citizen a tax-funded “voucher” to give to the campaign of their choice or by capping individual donations at $100.

In Connecticut, 78 percent of elected representatives opted into the new system in the first year, according to Lessig. The next year, a bill to increase the state’s bottle deposit passed after having been stalled for 18 years. Freed from the influence of the bottle manufacturing industry’s money, the issue could finally come to real vote.

“Imagine if we had legislation on the merits,” Lessig said.

Recent Supreme Court decisions, however, have only increased the influence of corporate money on elections. Most criticism has centered on Citizens United v. Federal Election Commission, the 2010 decision that effectively created Super PACs (political action committees capable of accepting unlimited contributions for independent expenditures in campaigns). While Lessig predicted the court might soon reverse its position, he cautioned that limiting Super PACs wouldn’t be enough.

What the country needs, Lessig said, is a grassroots movement — like the Tea Party in 2009 or the recent Occupy protests — to force the issue of campaign finance reform onto the Beltway agenda.

Americans on both sides of the aisle agree that the country faces pressing problems, from climate change to health care reform to the national debt. But none of those issues can be resolved, Lessig stressed, until we address the problems with the current political system itself.

“We get no progress on any of these until we change this underlying corruption,” he said. “The alcoholic could be losing his liver, his job, his spouse. But what we all recognize is that he doesn’t solve any of those problems until he solves his alcoholism first.”

The next lecture, “Stages of Reading: How Differences Between Better and Poorer Readers Develop,” will feature Vicki Jacobs, lecturer and associate director of the Teacher Education Program at the Harvard Graduate School of Education. The lecture will be held March 22 at 6 p.m. in the Boston Public Library, Jamaica Plain Branch, 12 Sedgwick St.