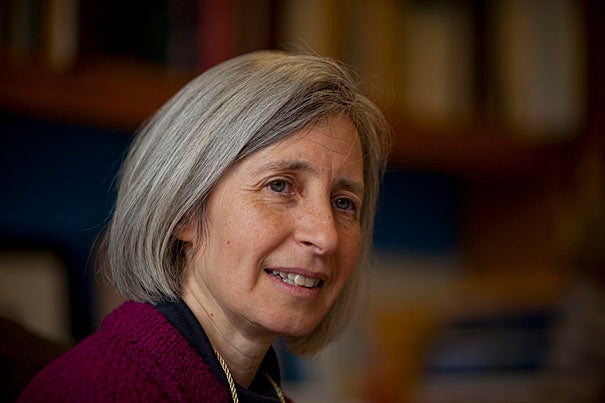 When a devastating earthquake struck Haiti on Jan. 12, Louise Ivers narrowly escaped a building as it crumbled around her.

As it happened, Ivers, an assistant professor at Harvard Medical School (HMS) and clinical director in Haiti for Partners In Health, was in Port-au-Prince to discuss disaster preparedness. Soon she was tending to acute injuries in a local hospital. She also had to take quick action when needed, such as providing urgent, life-saving surgery to a man without easy access to an operating room or anesthetics.

Such moments illustrate the “living links between Harvard and Haiti,” said Paul Farmer, co-founder of Partners In Health, a Harvard-affiliated aid agency, during a noontime address to the Harvard medical community today (Feb. 11). The discussion, titled “Harvard and Haiti: A Collaborative Response to the January 12 Earthquake,” included other tales displaying the fortitude of the Haitian people, the responsiveness of the Harvard community, and the power of partnership.

But the talk also focused on potential.

“What is the role of the American research university in addressing the great social problems of our time?” asked Farmer, HMS Maude and Lillian Presley Professor of Social Medicine. “How do we solve the problems of poverty, privation, inequity, and disasters, both natural and unnatural?”

The answer, according to Farmer and a cadre of panelists, is to act strongly. “To do global health, we have to do global health,” said Farmer. That is, he said, the only way to get at the root of international health care problems is to examine them in the process of delivering health care around the world.

Farmer described his approach in medical terms. To make a diagnosis, he said, “You have to do the physical exam yourself.” Having spent the past 25 years providing and examining health care in Haiti, Farmer characterized the current situation as “an acute injury on top of a chronic condition.”

As for prescriptions, Farmer also took a page from the clinician’s handbook:  “Plans for patients, if they are to succeed, must be plans made with the patient.” In the past, he said, there have been too many recommendations for Haiti, and too little done to strengthen the hands of the Haitian people.

Haiti has long suffered from health and poverty problems. Now, with government buildings reduced to rubble, with its only public teaching hospital in ruins, with 225,000 homes destroyed and millions of people in need of food and clean water, action is imperative. But, according to Farmer, such action must come in harmony and cooperation with the Haitian people.

“A university like ours can offer its own brand of pragmatic solidarity and set the highest standards for research, teaching, and service,” Farmer said.

The event was part of the Talks @ 12 series, periodic lunchtime discussions featuring faculty members and special guests who speak to the Harvard medical community.